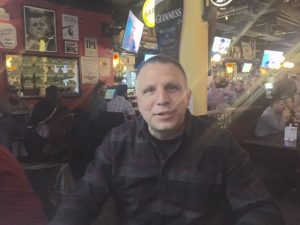 McCann’s Irish Oatmeal and Mike Haggerty Buick/GMC/Volkswagen present Hibernian Radio as we continue to honor our Irish First Responders. This week’s show promises another hour of great stories and craic as we welcome Chicago Police detective Ed Beazley to the show. Ed grew up in St. Denis parish. His dad and uncle were both cops and he was raised listening to them both tell funny cop stories. He’s been a cop for the last 23 years and works in Area South and he loves his job. “We just laugh all day long.” His partner, “one of the toughest guys I know”, is his old friend from St. Denis, Gary Olson. Ed tells us lots of funny stories, but tragedy also entered his life back in 2011, when his daughter Emily was diagnosed with cancer. The entire Mt. Greenwood neighborhood rallied around her for the next several years, and Emily’s younger sister Olivia was a perfect bone marrow match. “They were partners through and through.” Both girls were appointed honorary Chicago police officers and Emily’s fight became a cause heard round the world. Rock star Taylor Swift called Emily on the phone and had chartered a private plane to take her to a concert, but she was too sick to go. Ed says, “She taught me a lot, she was an old soul, she was just a funny, funny kid.” Emily died in May of 2018 but her memory is honored with Ed’s commitment to her charity, a St. Baldrick’s Hero Fund.  http://www.kuresforkids.org/

We hear The Clancy Brothers perform The Bold Tenant Farmer and then it’s on to Houli Town for some crazy stuff, including a raucous “Who Cares?” We close out the show with a new tune from Damian Dempsey, SOFT RAIN from the Streetlights CD, a charity single and album by various Irish artists in support of Irish homeless charities. https://www.facebook.com/streetlightsalbum/