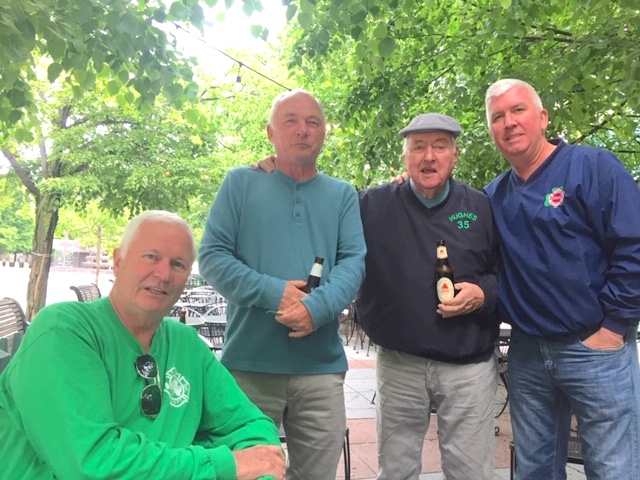 McCann’s Irish Oatmeal & Mike Haggerty Buick/GMC/Volkswagen present The Hibernian Radio Hour as we continue our focus on Irish First Responders. This week’s guest is the one and only Jerry Hughes, retired Chicago Fire Department Captain who spent 32 years on the job and retired on 11-1-11. More importantly, Jerry represents five generations of Chicago Firefighters in the Hughes family going all the way back to the Chicago Fire and a neighbor of the Hughes’ named Mrs. O’Leary over on DeKoven Street. In addition to being a raconteur, Jerry is also the family historian and he weaves anecdotes from some of the most significant fires in CFD history, including the Green Mill Hotel, Mickleberry Sausage Company, The Stockyard Fire, Our Lady of Angels Fire, The Iroquois Theatre Fire in 1903 when over 500 people lost their lives trying to see comedian Eddie Foy. Firefighters from the Hughes family worked every one of them and their legacy with the CFD is unmatched anywhere, including Boston and New York. In spite of the tragedies, Jerry is a lot of laughs, and insists in retirement that “I don’t miss the circus, but I miss the clowns!” Don’t miss this interview! We break out the Kerry Gold Cheese at that point on the patio at Lizzie’s as Jerry’s cousins and brothers and their wives all join in with the stories. Some “Who Died” and news of the Irish community and a big plug for The Emerald Society Rib Fest at the FOP Lodge on Monday June 10th, starts at 7PM. News from The Twisted Shamrock and Barney Callaghan’s “Country on Western” Fest coming up Then it’s off to Houli Town for some shenanigans before our final joke and signing off for this week. Thanks for listening!