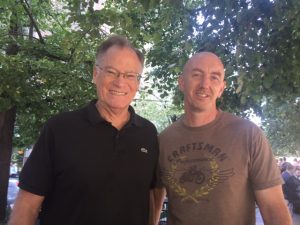 McCann’s Irish Oatmeal, Mike Haggerty Buick/GMC/Volkswagen, and Personal Injury Attorney Caroleann Gallagher present The Hibernian Radio Hour. In continuation of our dedication to Irish First Responders, we are delighted to welcome Dublin native, Alan Webb, to the show. Alan has 22 years experience with the Chicago Fire Department under his belt. He was a member of An Garda Siochana in North Inner City Dublin for 3 years before he won the Green Card Lottery and moved to Chicago in ’94. He’s also a part-time Police Officer in Grayslake and Elmhurst.  He spent a year in Afghanistan with the Illinois Army National Guard before settling down to become a firefighter of Engine 63 at 67th St & Blackstone. Alan has some great stories about some of the calls hes taken including one that led to his team being presented with an award. Himself and Houli get on like a house on fire – no pun intended! Alan has a great quote about being a firefighter “Nobody cares what color your skin is as long as it’s thick!”. He shares some family stories about his wife and three beautiful daughters here and some from home in the Emerald Isle. What a great guy! We’re then joined by CEO of The 100 Club of Chicago, Joe Ahern. The 100 club are holding a fundraiser, ‘Davern’s Fight for the Fallen Fundraiser‘, at Davern’s Tavern on 8527 W 79th St in Justice from 11am to 11pm on Saturday August 10th. Tickets are $15. These guys do outstanding work in providing for the families of fallen First Responders so be sure to come out and support this worthy cause!  We check in on the local obits, Irish-American News and of course, we take a visit to our favorite place, Houli-Town! Playing out the show this week is Van Morrison with ‘Wavelength’. Another great show with even better guests!