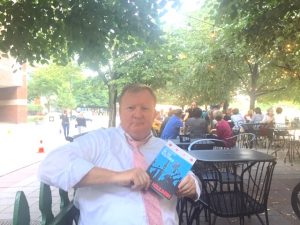 McCann’s Irish Oatmeal, Mike Haggerty Buick/GMC/Volkswagen and Personal Injury Attorney Caroleann Gallagher present The Hibernian Radio Hour and we’re back this week as we pay homage to another First Responder, Detective Bill Heneghan. We’re continuing where we left off with Bill a few weeks ago when we were “rained out” during the first half of his interview on the show. Bill grew up in St. Monica’s Parish and attended Gordon Tech High School – Go Rams! He has been on the force for 23 years, spending 10 years as a Patrolman and he currently works in the 18th District, investigating and solving burglary and robbery crimes. He gives our listeners some simple advice on how to stay safe when using rideshare apps in the city. This guy has some nail-biting stories to share including one about an Israeli diamond thief whose criminal career came to a sudden halt with Bill’s help. He also describes a ‘Dognapping’ case and explains how he solved it! Houli and Bill talk family and values but mostly share hilarious stories and great banter. We play Bob McNamara’s, of The Chancey Brothers, version of ‘Streets of New York’  This is followed by this week’s obituaries and Houli fills you in on our annual Movie Hooley coming up next month. Then it’s onto the Irish American News before we make our final stop at Houli-Town!