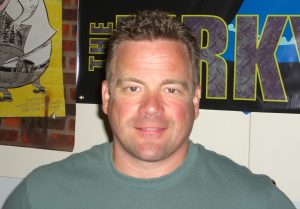 McCann’s Irish Oatmeal,  Mike Haggerty Buick/GMC/Volkswagen and Personal Injury Attorney Caroleann Gallagher present The Houli’s Hooley with brothers, Bill and Paddy Houlihan and their very good friend, Clay O’Brien. The boys recap their Labor Day Weekend shenanigans. Bill points out “There would be no Labor Day without Unions!”. Subtle digs about Bill’s ‘George Michael’ beard and we get a detailed recipe of their Mom’s ‘Irish-American Spaghetti’. Paddy’s kids are going through ‘Screen Whithdrawals’. Paddy’s new charity – ‘Screens for Squares’. Who is Benedict Cumberbatch?.. And now, it’s what you’ve all been waiting for  – The one and only Johnny Brennan is on the show this week and this guy is UNSTOPPABLE! Johnny talks about the creation of The Jerky Boys and how his characters were based on people he knew in real life. He recalls the day Howard Stern played The Jerky Boys on his show and the craziness that ensued. As the guys say, ‘It’s timeless!’, with fans being as young as 5 and as old as 95. Clay and Paddy recount some of their favorite skits and poor Bill can’t get a word in edgewise! Johnny also chats about his role on Family Guy, the popularity of his movies and most importantly, the new record coming out. You’ll be happy to hear that Chicago is one of his favorite cities! Go check out The Jerky Boys website to purchase The Jerky Boys merch and to keep updated on the upcoming album release. Our 3 amigos end out the show with Bill’s upcoming trip to Wisconsin and Clay’s crazy Superbowl party story from years ago. What an absolute treat the show is, this week, with an incredible guest and the usual mad banter!