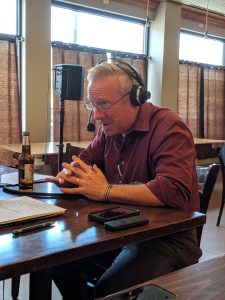 McCann’s Irish Oatmeal, Mike Haggerty Buick/GMC/Volkswagen and Personal Injury Attorney Caroleann Gallagher present The Hibernian Radio Hour and this week we’re recording the show at The Cork And Kerry Pub on Western Ave who are hosting the ‘Our Irish Pub‘ TV show taping. Detective Bill Donnelly, West Beverly native, is our first guest this week. He has been with the CPD for 25 years, working for the last 13 years as a Robbery Detective. He attended St. John Fisher School and Marist High School in the neighborhood. Bill catches us up on his family and how his father, a Homicide Detective, didn’t want him to join the force. We hear some great stories about his father’s time as a Chicago Cop and some of the infamous cases he was a part of, including that of the ’70s Grant Park serial killer/cannibal. Lester Harrison. Bill also shares some of his own career highlights, which including being a piper for The Emerald Society and his trips with them to Ireland. Don’t forget that the Annual People with Disabilities Drive, sponsored by The Father Perez Knights of Columbus Chapter, otherwise known as The Tootsie Roll Drive, will be taking place from September 20th-22nd. Give Bill a call at 773-914-2635 if you’d like to help out! 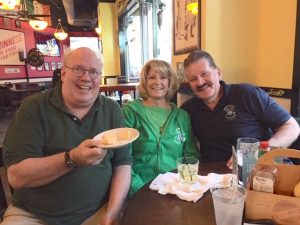 Our second guest is our old pal and returning guest, Jeff Lange. Jeff is a recently retired 30 year Cook County Sheriff’s Police Officer. He’s a Bridgeport guy and he has some unbelievable stories to share about his days as an undercover narcotics cop and some more recent stories about him being ordained as a minister. He wants to remind you all that the Emerald Society’s Annual Dinner Dance will be held at Gaelic Park on Saturday September 28th. Houli closes out the show with this week’s Obits, some news from the Irish American community and some “Houli jokes”. Don’t forget to get your tickets to The Movie Hooley at the end of the month. We’re very lucky to have not one, but TWO great guests this week!