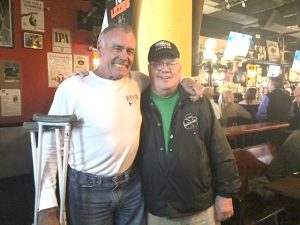 McCann’s Irish Oatmeal, Mike Haggerty Buick/GMC/Volkswagen and Personal Injury Attorney Caroleann Gallagher present The Hibernian Radio Hour and Houli begins the show by looking back over the weekend’s success at the 5th Annual Irish American Movie Hooley. Our guest this week is a 33 year retired veteran of the Chicago Fire Department, Kevin Casey. Kevin grew up on the West side in St. Angela’s Parish and attended St. Pat’s High School. He gets into the family talk with stories about his five kids, his father owning a saloon and how all of his brothers were in the Fire Dept.He started out at Ashland & Haddon and later moved to Chicago & Laramie where he stayed until his retirement in 2012.  Kevin has also had a very successful career in show business, staring in a few well-known movies including Ron Howard’s ‘Backdraft’. This guy has done it all! Houli fills us in on this week’s Irish American News and of course, the local obits. We take a small musical break with Van Morrison’s “Bright Side of the Road”. Kevin comes back for one more story about a call he made as an EMT where he got himself into a “sticky’ situation. And then we’re off to Houli-town to close out the show. Another great show for you this week, folks!