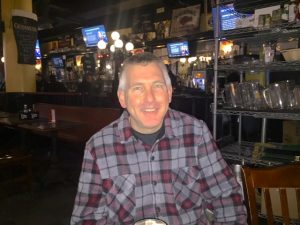 McCann’s Irish Oatmeal, Mike Haggerty Buick/GMC/Volkswagen and Personal Injury Attorney Caroleann Gallagher present The Hibernian Radio Hour and we continue in honoring our Irish First Responders this week with 29 year CPD veteran, Captain Paul Kane, as our guest. Paul grew up in St. Margaret of Scotland Parish and later moved to Beverly. He delves straight into his Irish heritage, discussing his grandfather who was from Mayo and how their name was changed from ‘Keane’ to ‘Kane’. He took the Cop test and entered the academy on the same day as his older brother – working on the Force and serving the public runs in his family! Paul sees plenty of action working in the Wrigleyville area during big events – “It’s amazing what drunk people will do!”. He has some great stories from being on the Force that he shares with Houli including the time he was almost squashed between two cars in an accident. He chats about his family, his skydiving experience and his trips to Ireland. Here’s a guy with great stories to tell about his experiences on duty AND he’s a Sox fan! We take a musical break with ‘Friends For Life’ by The High Kings. That’s followed by Irish-American news and Obituaries. We take one final stop at our favorite place: ‘Houli-Town’!