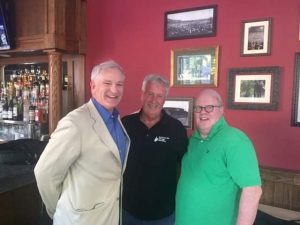 McCann’s Irish Oatmeal and Personal Injury Attorney Jim McGing present the Hibernian Radio Hour. We’re into the second week of our Police Pub Tour at the Cork & Kerry at The Park and we’re joined by US Senate candidate and former Lake County Sheriff of 12 years, Mark Curran. Mark grew up in Lake County and tells Houli about working his way up the ranks to become Sheriff. He describes himself as having a ‘blue collar mindset’. Mark discusses his goals as a politician and his personal connection to the Republican Party with Houli. There’s plenty of political agreement between these two but they share a difference of opinion on certain topics! Mark goes on to discuss his heritage in Mayo and Clare and he shares a wonderful success story about his grandfather reaching America after being incarcerated in Australia by the British. This guy has some big plans for America’s political future and he shares some of those aspirations with Houli. “If it can be made in America, it should be made in America!” Mark says about U.S. companies setting up abroad. 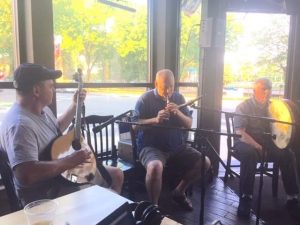 ‘Defund the Police’ and ‘Aunt Jemima’ are just some of the other controversial topics these two delve into during this week’s riveting interview. Mark clearly knows what he’s talking about as well as having the experience to back that up so be sure to check out his political mission here. Houli brings us up-to-date on the most recent obituaries and we play “Wild Colonial Boy” by The Clancy Brothers for Tom ‘Crash’ McKenna who was the winner of this week’s Facebook caption contest. We go to a musical break with some special live trad music by Jimmy Cloonan, his brother Coleman Cloonan and Terry Hodges. Then it’s off to “Houli-Town” for some well-needed hilarity before our musicians  return to play us out with some lively tunes!