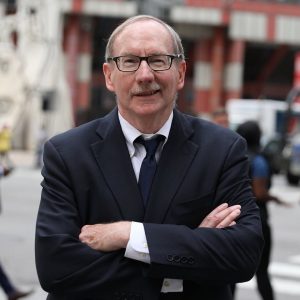 McCann’s Irish Oatmeal and Personal Injury Attorney Jim McGing present the Hibernian Radio Hour. We continue our Police Pub Tour at The Curragh Pub and we’re joined this week by our sponsor, Jim McGing and accompanying him is Republican Candidate for Cook’s County State’s Attorney, Judge Pat O’Brien. Pat attended St. Ignatius High School, followed by Notre Dame and DePaul Law School. This guy has an impressive record including his time working as Felony Trial Supervisor, the Bureau Chief of the Criminal Division and Chief Deputy of the State’s Attorney’s Office. He has handled some of the biggest criminal cases in Illinois and it’s safe to say that he’s greatly respected in the field. Pat, Houli and Jim discuss the how’s and why’s surrounding Pat’s decision to run for State’s Attorney and Jim tells Houli about his time working in that same office. Kim Foxx’s handling of the Smollett case and her reaction to the recent looting are hot topics of conversation between these three. “We have another virus; these violent crimes.”, Pat comments on the release of many dangerous incarcerated criminals by Foxx. He shares his opinion on the new ‘Defund the Police’ culture and he gives some insight into his rich Irish heritage. This guy has a lot to say and the craic is great between these three so make sure to check out this great interview! You can check out Pat O’Brien’s campaign here. We go to a musical break with the epic “Green and Red of Mayo” by The Saw Doctors. Houli brings us up-to-date on the most recent obits and then there’s more music with “To Win Just Once” by The Saw Doctors and “In the Rare Ould Times” by Chicago’s own, Liam Durkin. Then it’s off to our final stop at our favorite place, ‘Houli-town’. A very musical show this week with two of our favorite guests to-date. Have a listen for another great one!