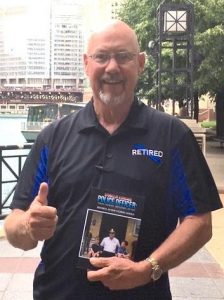 McCann’s Irish Oatmeal and Personal Injury Attorney Jim McGing present the Hibernian Radio Hour. We continue on our Police Pub Tour at The Emerald Isle in Edison Park this week and we’re joined by retired CPD Sergeant, Larry Casey. The Edison Park native wrote a book filled with stories from his years on the job called “Stories Of A Chicago Police Officer” and $2 from every copy goes towards the Police Memorial Foundation. “It’s a bird’s eye view into the Police world”, Houli comments on the book. Larry has many stories to share that aren’t in the book and he tells many of those on air, including the incident with a prosthetic leg and dealing with PETA and “the frickin chickens”. Larry was only 25 when he joined the Force and he takes Houli through some of the districts he worked and which were his favorites and not so much. Butchered bodies in garbage chutes and fridges being thrown from buildings are just some of the crazy things he has experienced working in The Projects. Larry doesn’t hold back and shares some of his dangerous war stories with Houli including dealing with assisting an officer in trouble with a suspect wielding a knife and a hypodermic needle – he takes us through how to execute a plan in a situation like that! He has an infinite amount of stories from the good and the bad to the extremely ugly. The current public opinion on the Cops is a hot topic this week and both Larry and Houli give their own take on the current ‘cancel culture’. “Police work is dirty and violent..”, Larry replies when asked about the protests. He’s definitely a no-nonsense kinda guy! Larry ends his interview by reading out an essay he wrote called, “My Flag”. Our second interview this week is a brief chat with John Richards via phone. John runs the Irish American Business Network which is a fraternal organization for Irish-Americans all across the country and he fills Houli in on how their organization works. Our in-house band, The Cloonan Brothers, delight the crowd with some live reels and jigs.  Houli brings us up-to-date on the most recent Obits and then it’s one more well-needed trip to our favorite place, ‘Houli-Town’.