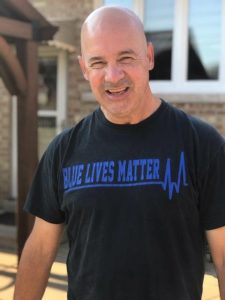 McCann’s Irish Oatmeal and Personal Injury Attorney Jim McGing present the Hibernian Radio Hour. We continue on our Police Pub Tour at Fr. Perez Knights of Columbus on 111th Street in Mount Greenwood and this week we’re joined by 18 year CPD veteran, Bill Wagner. Many of our previous guests are in the audience tonight! Bill is a Mount Carmel guy like Houli so these guys hit it off instantly! He worked in the Board of Trade, like Houli, for 17 years and attended Calumet College of St. Joseph. Bill is a local guy and he chats to Houli about his family and his current busy work schedule. He delves into how and why he decided to take the Police test and what his father’s reaction was to the news of his acceptance. Back in the day, Bill played football as Defensive Back and both he and his brother played on the State Championship team. He has more than his fair share of stories from his time on-duty including the time he came across a guy shooting a shotgun into the air in a  parking lot while he had another arrestee in his squad car. “It’s all about respect!”, Bill comments on the current cop relationship with the public. He and Houli also discuss the recent assaults on the Cops during looting and Bill shares his own experiences from the past few weeks. He currently works in the 8th district and he only joined the academy at 38 years old – there’s no stopping this guy! Bill has some stories about being the ‘old guy’ during training..  What a pleasure it was to chat to the great ‘Wags’! Our second guest this week is Dennis McNamara who is here to fill us in on the upcoming Tootsie Roll Drive on September 18th & 19th. They raise about $50,000 every year and that’s distributed among several important charitable organizations including Special Olympics. “I believe we are helping those who need it the most”, Dennis says about the annual drive. Be sure to help out in any way you can! We hear “The Mountains Of Mourne” by John McCormack, chosen by the winner of this week’s caption contest, Patrick Doc Connolly and Houli brings us up-to-date on the recent obituaries. We take a well-needed trip to ‘Houli-Town’ and that’s followed by some lively tunes from our in-house band, The Cloonan Brothers, to end another great show this week.