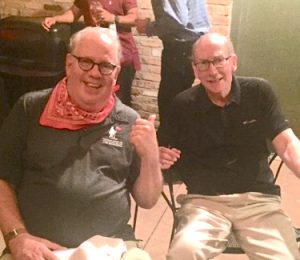 McCann’s Irish Oatmeal, Personal Injury Attorney Jim McGing and Fox’s Pizza present the Hibernian Radio Hour. We continue on our Police Pub Tour back at The Cork and Kerry Pub on Western Avenue and this week we welcome Judge Pat O’Brien back to the show. Pat is currently running for State’s Attorney and he joins us to catch us up on how his campaign is going. He attended St. Ignatius High School, followed by Notre Dame and DePaul Law School. This guy has worked as Felony Trial Supervisor, the Bureau Chief of the Criminal Division and Chief Deputy of the State’s Attorney’s Office. He and Houli delve straight into what has changed in Chicago since Pat’s last visit to us a few weeks ago. Foxx’s handling of the Smollett case and her reaction to the recent looting downtown are hot topics of conversation between these two. Pat tells Houli, “In 3 and a half years, Kim Foxx has dismissed 25,000 cases.” That is crazy! He believes that the State’s Attorney should have a great relationship with the Police in order to keep the peace. Social agendas, political debates and lying to the public are just some of the other topics of conversation brought up by Pat. “Kim Foxx, Debate me!”, he exclaims! Pat certainly has the experience and resume to be an extremely successful and popular State’s Attorney so be sure to get out and vote! You can check out Pat O’Brien’s campaign here. Pat’s final comment is “If you don’t have integrity, then nothing matters..” There’s plenty of political talk but there’s also great craic between these two, as usual! Houli brings us up-to-date on the recent obituaries and we hear “The Fields of Athenry” by Cathy Maguire chosen by the winner of this week’s caption contest, Mike Miller. Houli is then joined by his sons, Paddy and Bill, to promote their radio show, “The Houli’s Hooley ” that’s also hosted by Clay O’Brien. The boys describe their show as “improv-driven” and it gives listeners a look into their lives as friends and fathers. Our final guest this week is our old pal and co-host of The Skinny & Houli Show, James “Skinny” Sheahan. He and Houli reminisce on their past trips to Ireland and Skinny tells Houli about his time working at the State’s Attorney office. “The State’s Attorney’s office looks out for the victim but the present State’s Attorney has that reversed”, Skinny comments. He shares his views on why Pat O’Brien is the perfect candidate for the position. Make sure you’re registered to vote! We take a musical break with some lively tunes from our in-house band, The Cloonan Brothers, to end another great show this week.