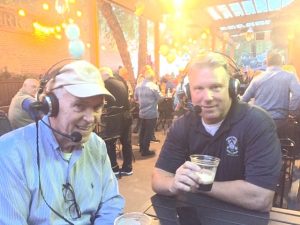 McCann’s Irish Oatmeal, Personal Injury Attorney Jim McGing and Fox’s Pizza present the Hibernian Radio Hour. We continue on our Police Pub Tour back at The Cork and Kerry Pub on Western Avenue and this week we welcome two special guests, Tom “Tucker” Sheahan and Tom Herion, both of whom have worked in the Lyons Police Department. Both these guys have impressive careers – Tucker has been working in Law Enforcement for 29 years, with experience in the Chicago Aviation Police as well as working as Chief of Police in both the Oak Brook and Lyons neighborhoods. He currently works as Village Manager in Lyons and he gives Houli some insight into what that job entails. Tom attended Weber High School and has been in Law Enforcement for over 35 years, working in Federal, State and local departments. He is currently the Lyons Chief of Police so t’s safe to say both fellas have serious reputations in Chicago! Tom Herion is an avid piper and is a member of The Pipes and Drums of The Emerald Society and The Chicago Garda Pipes and Drums. The guys discuss how they met and the success of their Police Dept in Lyons. Tucker shares his take on the current state of the public’s relationship with the cops and both of them discuss how things have changed since camera phones were invented. These 3 lads delve deep into a discussion about what we can do to help the Police Dept during these crazy times. Antifa, Kim Foxx and criminals getting away with their crimes are some more important topics that are discussed between these three. Tucker comments that Foxx is “the worst State’s Attorney in the world..” and urges you to vote for Judge Pat O’Brien instead. The effects of the recent looting and protesting on businesses and companies nationwide is another hot topic of conversation this week! On a lighter note, these two have some great stories from their time on the Force, including stories about Tom Herion’s infamous father and their shared work trips. The two Toms certainly give us a look into the success of suburban Law Enforcement. Our next guest steps away briefly from his Retirement Party to join us on the show. Sgt. Brian O’Connor is a 30 year CPD veteran and he grew up in Visitation Parish. He is also a Marist graduate! Brian chats about his family, including his father who was also a Police Officer as well as his brother, Jack, who wore his father’s star on the job. Houli brings us up to date on the recent obituaries and that’s followed by some ‘Houli’ jokes. Our in-house band, The Cloonan Brothers, play us out this week again with some lively reels. Another jam-packed show, folks with plenty of entertainment for all!