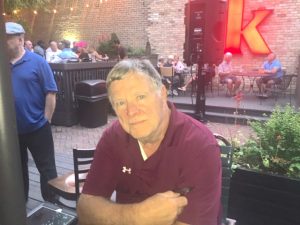 McCann’s Irish Oatmeal, Personal Injury Attorney Jim McGing and Fox’s Pizza present the Hibernian Radio Hour. We continue on our Police Pub Tour back at The Cork and Kerry Pub on Western Avenue and this week we welcome the legendary CPD Lieutenant of 33 years, Peter Dignan. Peter is a Loyola graduate and has a very impressive resume including being a member of the Marine Corps and working as the Chief of the Fugitive Unit at the Cook County Sheriff’s Office. This legend is a highly decorated officer and some of the awards presented to him include the CPD Medal of Valor, International Narcotics Association Medal of Valor and being inducted to the Law Enforcement Hall of Fame. Peter grew up in St. Helena of the Cross Parish and attended Mendel High School. He tells Houli how he came to join CPD and he chats about his family – his father was a Railroad Policeman during the War years and some of his siblings are Law Enforcement veterans also! He has a story or two to share from his extensive career including his experience working in surveillance and the horror of investigating a serial murderer who they eventually caught in ’79. “The job is 90% based on your partner.. If you get a good one, you’ve got it made!”, Peter comments on how he led a safe and successful career. He has some important points to make about the current “Defund the Police” movement and what it means for the future of Law Enforcement. Mayor Lightfoot and his disappointment in her lack of leadership is a hot topic this week! Mental Health and the darker part of the job is also an important point of conversation between Houli and Peter. We end another wonderful interview this week with some sound advice from Peter to his fellow police officers on how to handle this current social climate and he wants to remind everyone to get out and vote! Houli brings us up to date on the recent obituaries followed by “Our Hero” by Sting and The Chieftains chosen by the winner of last week’s caption contest, Richard Haggerty. Houli shares some of his best jokes before we go to our in-house band, The Cloonan Brothers, to play out another action-packed show.