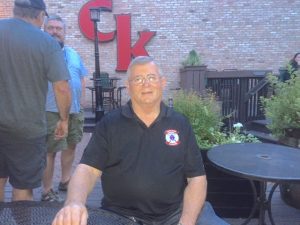 McCann’s Irish Oatmeal, Personal Injury Attorney Jim McGing and Fox’s Pizza present the Hibernian Radio Hour. We continue on our Police Pub Tour back at The Cork and Kerry Pub on Western Avenue and this week we welcome the legendary 36 year CPD veteran and Vietnam veteran, Ed May. Houli and Ed go waaay back – these two are both Mount Carmel guys! Ed grew up in Visitation Parish in a family of 6 boys and 1 girl and he gives some insight into what that family dynamic was like. He delves into some childhood stories about the old neighborhood and what they got up to back in the day. Ed also talks about how his brother’s death inspired him to join the Marine Corps and go to Vietnam for a year in ’69. This guy has some great stories from his time in the Forces. He and Houli catch up on “the ould days” and chat about their similar childhoods. Ed began working on the railroad when he returned from the war and joined the CPD a few years after. He takes us through his training and some of the many awards he has been honored with including the Superintendent’s Award for Valor and State of Illinois Law Enforcement Medal of Honor. He has met some interesting characters from his 36 years on the Force and shares some of his best and worst stories from his extensive career, including his scary standoff with some armed criminals. “It’s some daily entertainment!”, he says about a typical day on the job. He and Houli discuss the latest “Defund the Cops” movement and what’s in the future for CPD. Ed fills us in on how he’s enjoying his retirement before finishing up another great interview. This guy is an absolute hoot and the craic is mighty between the two! Houli then brings us up to date on the most recent obituaries and we take a musical break with Van Morrison’s, “Spirit will Provide”. Then we’re off on our final trip to “Houli-Town” and that’s followed by The Cloonan Brothers playing out the show as always with some lively tunes.