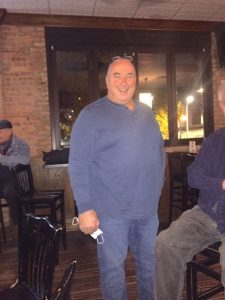 John Healy at Cork & Kerry at The Park.

McCann’s Irish Oatmeal, Personal Injury Attorney Jim McGing, Fox’s Pizza, Tullamore Dew and the Cork and Kerry Irish Pub present the Hibernian Radio Hour. We continue on our Police Pub Tour back at The Cork and Kerry Pub on Western Avenue and this week we welcome 26 year CPD veteran, John Healy. John begins by chatting to Houli about his family history and shares that all 4 of his sons are First Responders, two of them are cops and the other two are firefighters. Law Enforcement careers clearly run in the family – his grandfathers, several cousins, an uncle and a nephew all work as First Responders also. John also chats to Houli about his and his wife’s Irish heritage. He attended Brother Rice High School and still works security there every so often. John worked for 8 years in VICE and he explains what that job entailed as well as sharing some of his funnier stories from their sex worker setups. He used to work for FedEx to pick up extra money while he was still on the Force too – is there anything this guy can’t do?! John has some fascinating stories about his time working undercover, investigating human trafficking and other sex crimes. He has multiple hilarious stories about his less serious run-ins with particular sex workers over the course of his career and you have to hear them to believe it! Drugs are a big part of the prostitution ring in Chicago and John shares some of the sadder stories about the addicts he has seen and met with while undercover. “People are desperate, they’re going to take chances!”, John explains why people end up as drug and alcohol addicts. John takes us through the many job titles he has held over his extensive career and gives some insight into how a typical day for each job. The stories John has are never endless and absolutely priceless. Houli brings us up to date on the most recent obituaries followed by the latest news from the local Irish-American community. Then it’s off to ‘Houli-Town’ for one final stop before we end out the show with some lively music from The Cloonan Brothers.