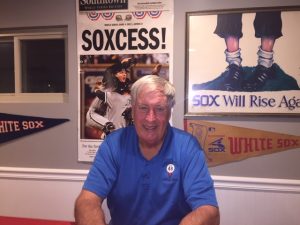 McCann’s Irish Oatmeal, Personal Injury Attorney Jim McGing, Fox’s Pizza, Tullamore Dew and the Cork and Kerry Irish Pub present the Hibernian Radio Hour. As we continue to honor the men and women of CPD, this week we take a detour to Johnny ‘Vegas’ Sheahan’s basement. Johnny used to own ‘Old Southside Pub’ on 111th & Western so he understands first hand how difficult this pandemic is on the local bar owners. He worked with CPD from 1973-79 before moving on to work for the city. Some of Johnny’s brothers opened Sheahan’s bar on the south side and he worked there alongside his other jobs. He also started his own business called ‘Monarch Outdoor Advertising’ which he still works at. It’s safe to say Johnny Vegas is a man of many talents! He remembers his late wife very fondly and looks back over some lovely memories of her with Houli. Johnny has some great personal stories about John Burge to share including the time he was in Johnny’s bar around the time of the infamous O’Brien and Fahey killings. He remembers his own personal experiences while working with CPD and the antics they got up to including working with “Tommy with the thick brogue from Mayo”. He shares many interesting stories with Houli, including one about his run-in with Jeff Fort and The Blackstone Rangers gang. Aside from all the great craic and banter, Johnny and Houli discuss the seriousness of the current social unrest and the community’s relationship with CPD now. There’s plenty of political chat between these two and Johnny wraps his interview by sharing his own words of advice for young cops. Houli then brings us up to date on the recent obituaries followed by a musical break with “The Green and Red of Mayo” by The Saw Doctors. We take a final trip to the beloved “Houli-Town” before wrapping up another great show this week!