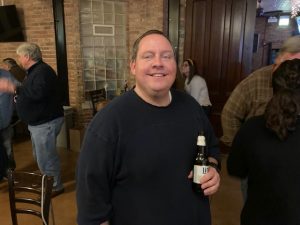 McCann’s Irish Oatmeal, Fox’s Pizza, Guinness and the Cork and Kerry Irish Pub present the Hibernian Radio Hour. We continue on our Police Pub Tour at The Cork and Kerry Pub on Western Avenue and this week we welcome 17 year CPD veteran, Dan Sheehan. Dan’s father and grandfather owned the infamous Sheehan’s saloon and he tells Houli about the emotional final day before closing. After graduating from Loyola, he worked at Misericordia for 7 years and then joined the Force. Dan attended Nativity of Our Lord Parish followed by St. Rita Mustang High School. He recently began teaching the new CPD cadets and talks about how proud he is of his new officers joining the Force in this social climate. Dan chats to Houli about his family and he shares some of the best stories about his father’s antics at Sheehan’s bar, one of which is documented in the The Daily Herald article from the day of Mayor Daly’s funeral. Houli and Dan discuss the tension in this current social climate and the ‘Defund the Police’ movement. He also shares a few of his funniest stories from his time on duty including the extra-hilarious story about escorting a woman in labor to the hospital and the craziness that ensued before even getting inside the hospital – it was just one thing after another! We are delighted to have this legend on the show and we’ll be sure to have him back in the near future to share the rest of his great on-duty stories! Houli brings us up to date on the recent obituaries and then it’s off to ‘Houli-Town’ for some well-needed comic relief! The Cloonan Brothers return to play out another exciting and fun-filled show this week. Be sure to check out and donate to our worthy fundraiser here to support our Hibernian Radio show and our First Responders!