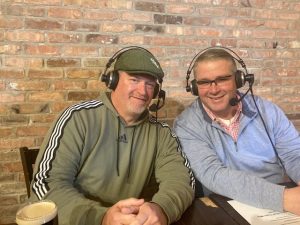 McCann’s Irish Oatmeal, Fox’s Pizza, Guinness, the Cork and Kerry Irish Pub and our old sponsor, Flood Brothers present the Hibernian Radio Hour. We continue on our Police Pub Tour at The Cork and Kerry Pub on Western Avenue and this week we welcome brothers and CPD officers, Chris and Joe Chausse to the show. Chris is the older sibling and currently works on the Civil Unrest Response Team. He discusses the tumultuous year they had particularly during the looting earlier this year. Joe began in the Sheriff’s Department in ’89 and currently works in the 4th district after leaving Gang Investigations. The brothers were born in St. Denis parish and they chat about family with focus on their parents and grandfather, James Sweeney. James was personally recruited by Mayor Richard J. Daley to work in the Park District. Their father, Joe, was head of recruit processing in the CPD and was one of the founding members of The Emerald Society Pipes and Drums. He also worked as a bodyguard to Mayor Daley as well as JFK when he visited Chicago. The banter between these brothers is comical! Chris still has their father’s patrolman star and shares the great story about the trouble he went through to retrieve it. Chris and Joe have only ever worked together once but they share some of the best stories from their days on the Force so far. Both brothers give their two cents about the current social unrest and how they worry about each other while on-duty, especially when they hear an officer is down. The lads also discuss John Cantanzara’s efforts, Lori Lightfoot’s stance against CPD and the difficult experiences cops have while issuing search warrants. The brothers end their interview by saying, “We’re like water and dirt – sometimes we make mud” Our second guest this week, Michael Sheahan, joins us by phone. He is a highly decorated NY police detective as well as a multi award-winning singer/songwriter. “God gave me this gift for a reason!”, he says about his musical skill. Michael grew up in the Bronx and he shares some stories from his time on working surveillance in New York including the time he found himself blocked in by perpetrators which ended up being the inspiration for his song that we then play called, “Carry Me On”. Houli then updates us on the most recent obituaries and we take a well-needed trip to ‘Houli-Town’ to end out another fantastic show!