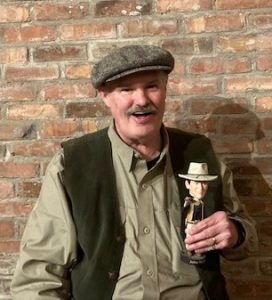 McCann’s Irish Oatmeal, Fox’s Pizza, Guinness, the Cork and Kerry Irish Pub and our old sponsor, Flood Brothers present the Hibernian Radio Hour. We continue on our Police Pub Tour at The Cork and Kerry Pub on Western Avenue and this week we welcome old pal and legend, James ‘The Duke’ Lynch AKA: Alamo! Alamo is a U.S Marine Corps Vietnam Veteran and a 39 year Veteran of the Chicago Police Department. He spent 15 years as a bodyguard to Mayor Richard M. Daley and shares some stories from that time including the practical jokes he played. It’s no secret that Alamo is a devoted fan of the ‘Duke’ John Wayne, even going as far as having to repeat the 5th grade because he skipped school for a month to see “The Alamo” 60 times in the theater. He even took time off work to attend Wayne’s funeral! Even with his love for The Duke, James questions why the star never served in WW2. In saying that, Wayne had a huge part to play in the rise and success of the Marine Corps. Alamo tells Houli the insane story about how he lost both his knees at 19 years old while stationed at a 60 caliber machine gun post. Ollie North was his platoon commander at the time! His war stories are exciting but horrifically terrifying.. “You always respect your enemy, but we were better!”, Alamo says. He is a Bronze Star recipient, having lost both knees in the war and still returning to combat after a 3 month recovery and he has many great stories to share including how he passed his entry test for the Police Academy, how his mother had a stroke when she was falsely told Alamo had been killed and getting drunk at John Wayne’s house with the man himself. His wife, children and the old days are just some of the many topics that the guys cover. He even brought a couple of mementos to the show including some photos and ornaments and each piece holds a fascinating story. This guy is a real character and we’re delighted to have him return to the show for the third time! Houli then brings us up to date on this week’s obituaries followed by  a well-needed trip to “Houli-Town”. Thank you to everyone who attended and donated to our 3rd Annual Hibernian Hooligan Ball last week – what a turnout and we raised over $10,000! We thank all our listeners and wish them a Happy and Safe New Year!