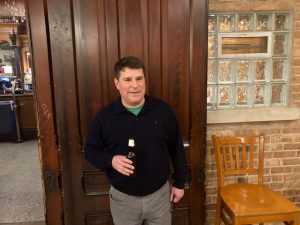 McCann’s Irish Oatmeal, Fox’s Pizza, Guinness, the Cork and Kerry Irish Pub and Flood Brothers present the Hibernian Radio Hour. We continue on our Police Pub Tour at The Cork and Kerry Pub on Western Avenue and this week we welcome Detective Pat Kenah. Pat grew up in Our Lady of Loretto Parish and attended Brother Rice followed by Loyola University. He worked at Mercantile Exchange for 8 years before joining CPD and now lives in West Beverly. He tells Houli how he went from working in Finance to joining CPD. He chats to Houli about his family with focus on the recent passing of his father and his Irish roots in Galway. “I’m more a Barry Fitzgerald than a John Wayne” Pat says about his work style. He currently works as a Detective at Area 2 and shares a story about almost being shot by a colleague and mutual friend of Houli’s. He also shares his scarier experience during the protests and looting last year, telling Houli about ‘The Battle of Trump Tower’ and the destruction he saw during that tumultuous time. The media, Lori Lightfoot and the ‘Anti-Police’ bill that was recently passed are just some of the other topics of conversation that the guys cover. Pat has been working on the Force for 18 years and has more than his fair share of tales to tell from his career so far including coming across a cop trapped in a squad car that was on fire and a hilarious story about forgetting a guy in the back of this squad car. Pat commends his successful career to working with great colleagues and he gives his take on the current negativity toward our Cops and the ‘Defund the Police’ movement. Houli then brings us up to date on this week’s obituaries followed by a final stop at “Houli-Town”. You can learn about and donate to our upcoming film, ‘In Search of Weeping Jim’ at the website. Another wonderful guest this week, folks!