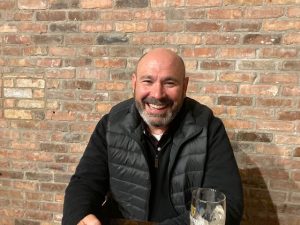 McCann’s Irish Oatmeal, Fox’s Pizza, Guinness, the Cork and Kerry Irish Pub and Flood Brothers Disposal present the Hibernian Radio Hour. We continue on our Police Pub Tour at The Cork and Kerry Pub on Western Avenue and this week we welcome back retired 32 year CPD Deputy Chief veteran, Kevin Ryan. Kevin is a south sider who attended Marist High School and has worked in many CPD departments including Narcotics, the Hostage and Terrorist Team as well as Commander of the 1st district. He currently works as Vice President of Security for CTA and it’s safe to say he has an impressive resume! His great-grandfather moved to Chicago from Ireland and joined the CPD in 1893 – his blood runs blue! Kevin tells the story about how his son was shot on-duty and the wonderful doctors that cared for him in the ER. He discusses his retirement, the difference between working with CPD compared to the CTA and he takes Houli through his typical work day. There are 40,000+ cameras on the CTA and he still works closely with CPD in catching criminals with the help of surveillance. These two also discuss the looting last summer and Kevin explains how the “organized crooks” take advantage of those expressing their First Amendment rights by hiding among the peaceful protestors. “99% of cops out there do their job honorably”, Kevin says in response to the recent ‘Defund the Police’ movement. He has his fair share of stories from his 32 years on the Force including how he handled unruly politicians in the St. Patrick’s Day parade and the idea he came up with to contain the politicians  who were pushing to the front. Kevin had a cameo in ‘The Fugitive’ and he chats about what it was like to work alongside some of Hollywood’s finest including Harrison Ford. Kevin contracted the coronavirus late last year but luckily he is safe and well now and he discusses his experience in the hospital while recovering. This guy is a Chicago legend and we’re delighted to have him back on the show once again! Houli then brings us up to date on the latest obituaries and then we take a well-needed trip to ‘Houli-Town”. You can donate and check out our upcoming film, ‘In Search of Weeping Jim’ at our website. Yet another exciting and fun-filled show this week, folks!