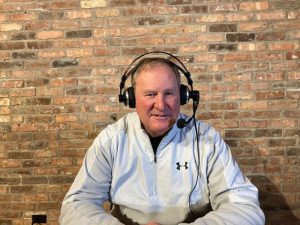 Fox’s Pizza, Guinness, the Cork and Kerry Irish Pub and Flood Brothers Disposal present the Hibernian Radio Hour as we continue on our Police Pub Tour at The Cork and Kerry Pub on Western Avenue and this week we welcome recently retired legend, Tim McCarthy. Tim worked in Law Enforcement for 48 years, with 26 of those as Orland Park’s Chief of Police and the other 22 years with the Secret Service. He grew up in St. Denis Parish and attended Leo High School. He graduated from the University of Illinois with a degree in Finance and took the test to join the Secret Service. Tim begins by discussing his family with Houli with focus on his 4 sisters and his wife, who grew up in the same neighborhood.. As the conversation continues, he and Houli discover that they have many friends in common and reminisce about some of the well-known characters from their neighborhoods. Tim began with the Presidential detail when he joined the Secret Service and he tells the infamous story about taking a bullet for President Reagan during the attempted assassination by John Hinckley Jr. He delves into the madness surrounding that experience and how he felt about the shooter’s release from prison a few years ago. Tim gives us some insight into what Reagan was really like behind closed doors and he tells the story about a St. Patrick’s Day dinner he attended along with celebrities and political figures. He has many funny stories to tell, especially about his kids while working for the President including how he feared they’d accidentally pull one of the hospital machine plugs out while visiting the President’s room and how one of his daughters always answered the special White House phone they had at home. He then talks us through his experience as Orland Park’s Chief of Police and shares some of the stories from that post. He and Houli discuss the current social unrest, especially the rise in crime in Chicago and Tim shares his two cents about the frayed relationship between the cops and citizens. He chats about his future plans for retirement which mainly consists of spending time in Florida to enjoy a well-deserved break. This guy is a true Irish warrior and all of us at Hibernian Radio salute you, Tim! Houli then brings us up to date on the recent obituaries and we take a musical break with “Celtic Symphony” by The Wolfe Tones. We take a trip to ‘Houli-Town’ to end out a super special show!