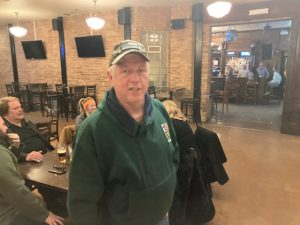 Fox’s Pizza, Guinness, the Cork and Kerry Irish Pub and Flood Brothers Disposal present the Hibernian Radio Hour. We continue on our Police Pub Tour at The Cork and Kerry Pub on Western Avenue and this week we welcome CPD veteran and old family friend of Houli’s, Mike Brady. Mike is the youngest of ten kids and he and Houli reminisce about growing up together. There’s plenty of family chat between these two old pals and they catch up on what their families are up to now. Mike attended St. Rita and grew up in Christ the King Parish. He worked as Chief on the Lewis University Fire Department before becoming a Cop and tells the story about how he moved from the Fire Department to the CPD. He began as a Chicago cop in ’78 and worked there for 12 years. This incredible veteran has 43 years in Law Enforcement and has an impressive resume including working on the Cook County Sheriff’s Police, in Gang Crimes and in Mayor Daley’s office detail for 2 years. He worked closely with Houli’s other old pal, Sheriff Mike Sheahan and shares some of his best memories from that time. You might also rememeber seeing Mike on the sidelines at the Bears’ home games working as security for former player and coach, Mike Ditka. He has plenty of hilarious stories to share from his time working with the team including winning the Super bowl and his friendship with Walter Payton. He moved to the Command Center at Soldier Field afterwards and still works there during Sporting events and music concerts. Mike is a founding member of ‘Peer Support’ which is a very important organization that supports fellow officers who are going through hard times. This legend ends his interview with, “The south side is the best side!”. This guy does it all and we are extremely honored to have him on the show! Houli brings us up to date on the latest obituaries – Rest in Peace to our dear friend, Katy Laxner. We finish another wonderful and insightful show with a well-needed trip to ‘Houli-Town’.