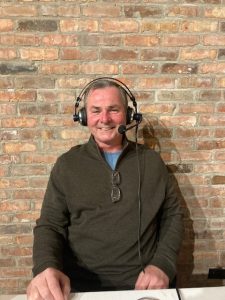 Fox’s Pizza, Guinness, the Cork and Kerry Irish Pub and Flood Brothers Disposal present the Hibernian Radio Hour. We continue on our Police Pub Tour at The Cork and Kerry Pub on Western Avenue and this week we welcome 28 year retired CPD veteran, Mike Ryan. Mike grew up in St. Ethelreda parish as well as St. Cajetan’s and he attended Leo High School. Houli and Mike have many friends in common and they look back to some of the well-known neighborhood names and the dodgy nicknames they were given. Mike chats about his Irish heritage with focus on his great-grandfather who hailed from County Cork. He is 4th generation CPD and took the Cop test but never joined as he was employed at the Board of Trade. He retook the test in ’88 and joined CPD in ’90 where he began as a Patrolman and moved up the ranks to Sergeant and Special Operations Sergeant where he worked in the high crime areas. The Bulls championship wins and the Democratic Convention are just some of the big events he oversaw as Sergeant and he has many a story to tell from those days. He also worked as Watch Commander in the 22nd district for 9 years. Mike explains what his duties there included and he shares some of his most interesting stories from those years including dealing with dangerous car jackings and working at some of the crazier St. Patrick’s Day parades. Mike chats about his family with focus on his father who died at a young age and the strong impression he has had on him throughout his life. Mike has his fair share of war stories from his time on the Force and he shares some of the more serious ones including dealing with a triple homicide and some of the predicaments he got into during foot chases. The guys discuss the ‘Defund the Police’ movement and Mike shares his two cents on the current social unrest -“They want to find fault where none exists”. Mike was working at McCormick Place up until the covid lockdown and he shares his future plans for his retirement. Houli then brings us up to date on the latest obituaries and that’s followed by a well-needed trip to ‘Houli-Town’.