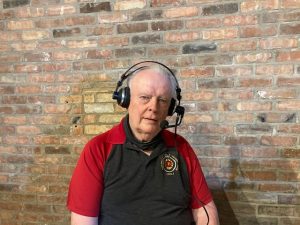 Fox’s Pizza, Guinness, the Cork and Kerry Irish Pub and Flood Brothers Disposal present the Hibernian Radio Hour. We continue on our Police Pub Tour at The Cork and Kerry Pub on Western Avenue and this week we welcome retired 31 year CFD veteran, Dan Sheehan. Dan grew up in St. Anthony’s parish and attended St. Rita as a Mustang. He majored in Accounting at the University of Illinois back when it was located at Navy Pier. His great-uncle, George, was elected to the House of Representatives in Springfield in 1918 and spent 42 years working there. Dan shares some stories from when his family lived with George and the many memories he has of this beloved character from his childhood. He delves into family talk with Houli with focus on his parents and discovering his Irish heritage in Ireland. Houli and Dan chat about the many friends they have in common including the 2012 St. Patrick’s Day Parade Queen and Dan’s great-niece, Sara Marie Collins, Dan joined the Fire Department in ’65 and was promoted to Lieutenant in ’70. He was a member of the Brotherhood of the Barrel and he and Houli discuss the CFD strike of 1980 – the strike was successful and they received more reliable and safe equipment because of it! Dan also discusses some of his favorite firehouses he has worked at over the course of his career and chats about the CFD’s relationship with some of the local politicians including Jane Byrne and Dan’s favorite, Mayor Daley. He had a personal friendship with Daley over the course of his career and he shares some of the most interesting stories with the listeners. It’s safe to say that he is a Richard Daley expert and delves into his political career stories in detail including the Daley family being at JFK’s inauguration. The craic between these two is mighty and Dan has plenty of stories to share from his life and extensive career. When Houli asks if he misses the work, Dan replies “I miss the clowns but not the suits!”. We take a musical break with “Joyce Country Ceili Band” by The Saw Doctors. Houli brings us up to date on the recent obituaries and we take a well-needed trip to ‘Houli-Town’.