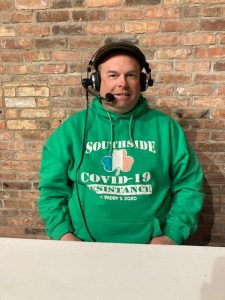 Fox’s Pizza, Guinness, the Cork and Kerry Irish Pub and Flood Brothers Disposal present the Hibernian Radio Hour. We continue on our Police Pub Tour at The Cork and Kerry Pub on Western Avenue and this week we welcome 22 year CFD veteran Captain Marty Doherty. He grew up in St. Denis parish and attended Brother Rice so there’s some healthy rivalry on the show this week between he and Houli. Both Marty’s father and grandfather were Chicago firefighters and he also has some cousins who are in CPD. His father set up the Gaelic Fire Brigade around the time of the infamous 1980 strike and they now have over 400 members! He chats about his family with focus on his Irish heritage. His grandfather hailed from County Mayo and his grandmother grew up in County Roscommon. Marty even married Irish –  his father-in-law is from Achill Island! His first assignment on the job was at Engine 78 located next to Wrigley Field – “It’s a good place to work if you like baseball and women!” He now works at 127th and Doty Ave and the guys there are known as the ‘Doty Dozen’. Marty is Chief Steward and an active member on the Executive Board of the Chicago Firefighter’s Union Local 2. He also used to play Gaelic football with ‘The Quinns’ and chats about his trip to Ireland and his experience playing there with the team. He shares many exciting yet terrifying stories from his time on the job so far including a ‘flash over’ that happened while they were fighting a fire and many of the guys were brought to hospital with burns, Marty included. He also shares what a typical day on the job consists of. We are honored to have such a great guy and the pride of Brother Rice join us this week We then take a musical break with the lively “Don’t Let The Truth Get In The Way Of A Good Story” by Gaelic Storm. Houli brings us up to date on the latest obituries as well as the local Irish-American news and we end another highly entertaining show with some goodbye jokes from Houli. Be sure to join us next Wednesday, April 28th at the Cork and Kerry at 7pm where Jim “Duke” Lynch, AKA: Alamo, 39 years CPD, Vietnam vet, Bronze Star Recipient and extraordinary story teller returns with more of his interesting tales!