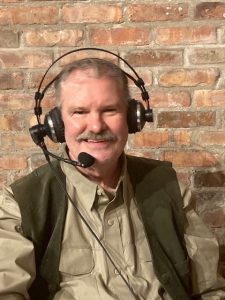 Fox’s Pizza, Guinness, the Cork and Kerry Irish Pub and Flood Brothers Disposal present the Hibernian Radio Hour. We continue on our Police Pub Tour at The Cork and Kerry Pub on Western Avenue and this week we welcome back the infamous legend and our old pal, James ‘The Duke’ Lynch AKA: Alamo! Alamo is a U.S Marine Corps Vietnam Veteran and a retired 39 year veteran of the Chicago Police Department. He is a South Shore native who attended St. Philip Neri School and Lyons Township High School. This guy is a man of valor who was awarded the Bronze Star after he lost both his knees in the war and still returned to combat after his 3 month recovery. It’s no secret that Alamo is a devoted fan of John Wayne, admiring him so much growing up that he had to repeat the 5th grade because he skipped school for a month to go see “The Alamo” 60 times in the theater! He and Houli begin by delving right into the controversy surrounding the ‘Defund the Police’ movement and the current social unrest. Alamo shares his opinion on the friction between society and CPD and he discusses the differences between being a cop today compared to when he was with CPD.  Alamo has a plethora of stories to share from his years on the Force as well as his time in Vietnam including a great story about his grandfather who had connections to the Genna crime family. He also shares many stories from the time he was stationed in Englewood including “The Turkey Leg Homicide” where a man was shot over Thanksgiving dinner. Gun laws, dangerous traffic stops and his work injuries are just some of the many topics of discussion between these two. We’re always honored to have Alamo join us here on Hibernian Radio to share his incredible stories that you have to hear from the man himself to believe! Houli then brings us up to date on the latest obituaries and we take a well-needed trip to ‘Houli-Town” to end another great show!