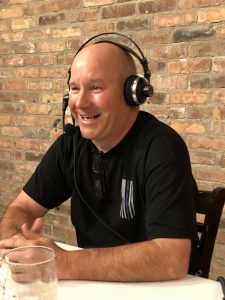 Fox’s Pizza, Guinness, the Cork and Kerry Irish Pub and Flood Brothers Disposal present the Hibernian Radio Hour as we continue on our First Responders Tour at The Cork and Kerry Pub on Western Avenue and this week we welcome 26 year Chicago Fire Department veteran, Eddie Grunauer. Eddie grew up in Queen of Martyrs parish and attended De La Salle. He studied Criminal Justice at Lewis University and worked as a Juvenile Probation Officer and in the Electronic Monitoring Division at the Sheriff’s Department before joining CFD. Eddie took the test to join the Fire Department in ’85 but he wasn’t called to join the force until ’94. He used to coach and referee highschool and college basketball and football games before that. Ed delves into the difficulties of being a firefighter during 9/11 and tells Houli about how he and 7 of his coworkers decided to drive to Manhattan to help out at Ground Zero at the time. 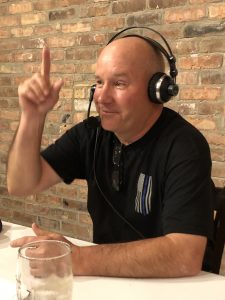 Eddie is a great storyteller!

He takes us through what they were tasked with doing there and the camaraderie between the NY Firefighters and the Chicago guys. The following year Ed and some of his colleagues held a fundraiser for the victim’s families – they raised over $100,000 by cycling almost 900 miles to New York. Ed currently works as Lieutenant with Engine 112 and has many stories from his time on the job so far that he shares with us including performing CPR on the father of the bride who suffered a heart attack at the church ceremony and finding a body in the water during the annual Air & Water show. He also mentions the time Sigourney Weaver went  ‘sliding the pole’ at their firehouse. Eddie chats to Houli about his Irish heritage and the trips he has taken to the Emerald Isle – his mother’s family hails from County Tipperary. This guy’s reputation precedes him and we’re delighted to have him join us this week! Houli then brings us up to date on the latest obituaries followed by a musical break with “Time Difference” by Ailbhe Reddy. We take a well-needed trip to “Houli-Town” to end another great show and make sure to check out our movie fundraiser here.