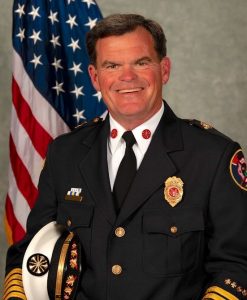 Fox’s Pizza, Guinness, The Cork and Kerry Irish Pub and Flood Brothers Disposal present the Hibernian Radio Hour as we continue on our First Responders Tour at The Cork and Kerry Pub on Western Avenue and this week we welcome 38 year Fire Service veteran, Chief Patrick Kenny. Patrick grew up on the south side and is a Brother Rice graduate. Both his parents hail from Ballinasloe in County Galway and he tells Houli about how they first met at a dance in Chicago even though they grew up in the same town in Ireland. His father, Mike Kenny, was an All-Ireland hurler and one of the founders of the Harry Bolands Hurling Club. Patrick has many great memories of getting to watch his father play and shares some of those with Houli. He was awarded Fire Chief of the Year in 2004 by the Illinois Fire Association as well as the George D. Post instructor of the Year in 2020. He has worked as Chief in both Hinsdale and Western Springs and he is the author of the international bestselling book, “Taking The Cape Off” which covers the topic of grief and the stigma surrounding mental illness. He delves into some of the traumatic experiences he has dealt with including being hit by a car at 14 years old and dealing with the sudden death of his father which affected him greatly. Patrick discusses how he went from wanting to join the seminary to meeting his wife and starting a family. He chats about his family with focus on his son, Sean and his depression and OCD diagnosis at just 5 years old. Sean was institutionalized after multiple suicide attempts and Patrick expresses the importance of his faith and the church during those tough times. He also shares some of the personal coping techniques that he and his family had during that turbulent time. Things get emotional as Patrick recounts his son’s time in ICU and the untimely death of his wife soon after his son passed. This guy has truly been to hell and back and we are honored to have him join us on the show to share his story! Houli then brings us up to date on the recent obituaries and we end another intense and jam-packed show on a comedic note with some jokes from the man himself. Be sure to check out Patrick’s book here.