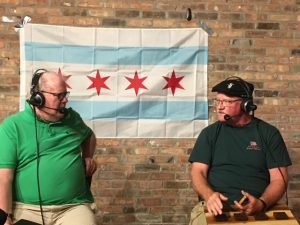 Fox’s Pizza, Guinness, the Cork and Kerry Irish Pub, Flood Brothers Disposal and Chicago Firefighters Union Local 2 present the Hibernian Radio Hour and this week’s show is dedicated to our upcoming film, “In Search Of Weeing Jim” – the story of the Irishman who is known as the ‘Father of the Chicago flag’. Our first guest this week is old pal of the show, Jeff Lange. Jeff brings us up to date on what has been going on in The Emerald Society during the pandemic. He joins us to promote The Emerald Society Rib Fest at FOP Lodge 7 on Monday July 19th on Monday, July 19th with music from the Larkin & Moran Brothers as well as the big picnic in Lions Woods, Des Plaines on Sunday, August 8th. Houli himself can vouch that both these events are great so mark them in your calendars! Jeff saves the best news for last with the announcement that our very own Mike “Houli” Houlihan will be crowned as Irishman of the Year on September 11th at the Emerald Society’s Dinner Dance & Awards Night at Gaelic Park. You can purchase your tickets here! Our second guest this week is another good friend of Houli’s and infamous Chicago History Detective, Rick Barrett. Since Rick was last on the show, he has been researching Weeping Jim Kearns in-depth and he reveals to Houli what he discovered on his recent visit to the Chicago Public Library. “He quarter-backed the whole flag project!”. Rick’s findings include the competition they held to find the flag’s design and how Weeping Jim studied Vexillology AKA: the study of flags. For those of us who may not know, Rick explains what each star and stripe represents on our beautiful flag. We’re always delighted to see Rick return to the show with his new historical discoveries! Our third guest this week is southsider Dan Schumacher. Dan is a photographer who created and generously donated some uniquely beautiful prizes for our raffle. He studied woodworking at Chicago Industrial Design & Art Center after his everyday job came to an end and he has been following this new love for woodworking ever since the pandemic began. Check out some of his other work here! Houli then brings us up to date on the recent obituaries, followed by live music from the southside Iegend himself, Liam Durkin. Liam treats the listeners to his original song, “The Legend Weeping Jim” which he wrote specifically for the film, “In Search of Weeping Jim”. He plays an array of tunes including his rendition of “Sean South of Garryowen” and Van Morrison’s “Into The Mystic”. Our good friend, Jimmy Cloonan then joins in to sing “The Fields of Athenry” followed by their cover of “Black Velvet Band”. These two maestros end out this week’s show with a bang with one last lively tune to lift the roof. Please visit our fundraiser page and donate to help us tell and document the story of “Weeping Jim Kearns”. All donors will be listed in the closing credits of the film!