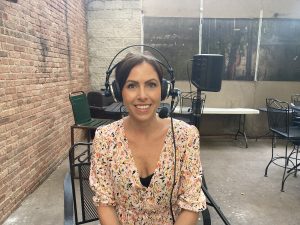 Fox’s Pizza, Guinness, the Cork and Kerry Irish Pub, Flood Brothers Disposal and Chicago Firefighters Union Local 2 present the Hibernian Radio Hour as we continue on our First Responders Tour at The Cork and Kerry Pub on Western Avenue and this week we welcome the lovely Lauren Catinella to the show. Lauren is the very first nurse we’ve had as a guest on the show and we are honored to have her join us this week. Houli and Lauren met when she was crowned as the 2014 St. Patrick’s Day Parade Queen. She took part in the contest for 10 years before winning and she and Houli discuss the history of the competition and some of the events the competitors take part in. Lauren grew up in St. Benedict’s parish in Blue Island and attended Marian Catholic High School followed by Illinois State University where she was a cheerleader. After graduating, she entered EMT and Paramedic school and jumped right into nursing school afterward. She just received her Masters in Nursing Education and she chats about how she will use her new degree in her future career. Lauren works as a registered pediatric hematology-oncology nurse at Comer Children’s Hospital and she won the 2020 Brittney McKinney Award for Excellence in Pediatric Oncology Nursing. Houli talks about the importance of recognizing nurses as First Responders and these two chat about Lauren’s Irish heritage and her upcoming nuptials next summer at old St. Pat’s church. Lauren tells Houli about her very first patient, Isabel Lopez and her personal experience in helping Isabel through her cancer journey. Unfortunately, Isabel passed away 2 years later and they renamed a street on 52nd in her honor. She was truly inspiring! Lauren also delves into the difficulties of her work, especially having to deal with the grief and sadness when her young patients pass away. It’s clear that Lauren is passionate about her job and she explains what inspired her to take this path and the importance of spending time at a patient’s bedside. As Houli says, “She is doing God’s work!”. She takes us through a typical work day and some of the intense situations she sometimes finds herself in especially during the summer when they see minors being admitted with gunshot wounds. The search for the cure for cancer is an important topic that these two delve into and Lauren discusses some of the extra programs and activities they have to help keep the kids engaged including summer camp and video games. She ends the interview by sharing some positive stories from the job including a hilarious story about a young boy who gave her the finger. We were honored to have this inspirational nurse join us this week! Houli then brings us up to date on some of the upcoming events around the city including his upcoming “Irishman of the Year” award that will be presented to Houli on September 11th by The Emerald Society. Then it’s over to the recent obituaries and that’s followed by a final trip to our favorite place called “Houli-Town”.