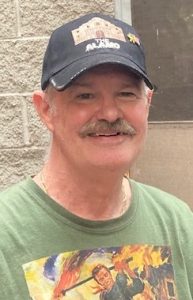 Fox’s Pizza, Guinness, the Cork and Kerry Irish Pub, Flood Brothers Disposal and Chicago Firefighters Union Local 2 present the Hibernian Radio Hour as we continue on our First Responders Tour at The Cork and Kerry Pub on Western Avenue and this week we welcome back the legend himself for the fifth time, James ‘The Duke’ Lynch AKA: Alamo! Alamo is a U.S Marine Corps Vietnam Veteran and a retired 39 year veteran of the Chicago Police Department. He is a proud South Shore native who attended St. Philip Neri School followed by Lyons Township High School. This guy is a man of valor, Bronze Star recipient, having lost both knees in the war and still returning to combat after a 3 month recovery. He spent 15 years as a bodyguard to Mayor Daley and shares some stories from his time working that post. It’s no secret that James is a devoted fan of the ‘Duke’ John Wayne. He had to repeat the 5th grade because he skipped school for a full month to go see his all-time favorite movie “The Alamo” at the theater and he even took time off work to attend Wayne’s funeral! James describes what it was like meeting John Wayne in person when he came back from Vietnam. He also chats about meeting Maureen O’Hara and shares a funny story about driving John Candy home from set one day. This Alamo wants to talk about the real Alamo in Texas and how they want to tear it down and he and Houli discuss statues being torn down due to the latest ‘”cancel culture”. James was working in Grant Park when the Columbus statue was torn down and was hit in the head with a frozen water bottle. “Our country is becoming what I fought against!”. These two continue to chat about politics and how politicians don’t care about the increasing crime because it doesn’t affect them. “When did American become so evil?!” James delves into his love for baseball, the close relationship he had with his father Frank and what is was like meeting Donald Sutherland. He is a family man who clearly adores his kids and 10 grandchildren and he chats to Houli about his Irish heritage and their upcoming trip to the Emerald Isle in October. The Alamo discusses his Irish heritage with focus on his ancestors who fought in the Irish Civil War. He and Houli talk about the history of the Irish War of Independence, the fearless Michael Collins and how his brother was an officer with Chicago Police. This local legend ends another insightful interview by bringing attention to the rise in the rate of suicide in CPD officers. “We’re losing veterans everyday!” It’s always sure to be an energetic show when Alamo is around! Houli discusses some Irish-American news including his upcoming group trip to Ireland from October 21st – 27th. If you are interested in joining the trip this year, please contact Deirdre at 1800-664-7474 or email at deirdre.kiely@special-ireland.com. Don’t forget, The Emerald Society will be presenting Houli with the 2020/2021 Irishman of the Year Award on September 11th from  6-11pm at Gaelic Park so be sure to save the date! Houli then brings us up to date on the recent obituaries followed by some well-needed jokes to end another entertaining show on a comedic note.