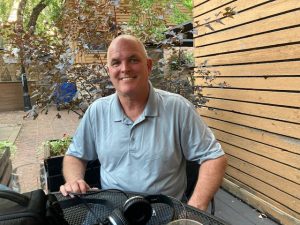 Fox’s Pizza, Guinness, the Cork and Kerry Irish Pub, Flood Brothers Disposal and Chicago Firefighters Union Local 2 present the Hibernian Radio Hour as we continue on our First Responders Tour at The Cork and Kerry Pub on Western Avenue and this week we welcome CFD Captain Tony Martin. Tony has been with the Chicago Fire Department for 33 years and he is the Captain of EMT Truck 45 in Mount Greenwood as well as the President of the Widows’ and Children’s Assistance Fund of the Chicago Fire Department. He grew up in Queen of Martyrs parish and attended Brother Rice. He graduated from St. Xavier’s University as well as Law School and began working with CFD in 1988  Tony worked as a Training Coordinator in Fire Investigation investigating the cause and origin of fires. He was often called to testify in court during this post so Law school was a natural transition for Tony. He describes the intensity of some of the court cases he testified in, especially the more serious crimes such as murder. Tony still practices law and he just took the exam for the role of Chief. Fingers crossed! He and Houli chat about family with focus on Tony’s four children and wife, Breda. He shares the story about how he met Breda on a night out with friends and the madness that ensued when their ride home was towed. There is a long line of First Responders in his family including his brothers, father, grandfather and seven uncles who have all worked as cops. Tony tells the fascinating story of how his great grandfather arrived at Chicago in the 1870’s and became a fireman in 1906. This whole family’s blood runs blue! During the show, a gang of characters from the 1965 Mt. Carmel Caravan drop by the show to harass Houli for some laughs. This crew meets monthly at The Cork & Kerry. Thanks guys! Houli and Tony get back to discussing many topics over the course of the show including the history of the Irish First Responders, future retirement plans and we even hear a great audience cheer by the Mount Carmel Class of ’65 especially personalized for Houli! Tony talks about how blessed he feels to be stationed in Mount Greenwood where the guys are like one big family. “We have a lot of laughs but our guys work hard!”. He explains that the firefighters with more experience help to mentor the new recruits and that builds a comradery between everyone. He takes us through their daily protocol and he discusses some of the serious calls he has responded to including a young girl’s near-drowning who then came to visit them at the Firehouse a few days after recovering. Tony is an engaging guy with plenty of stories to share including his recent vacation to South Dakota where his family won a prize to have dinner with Alison Arngrim and Charlotte Stewart from “Little House on the Prairie”. He and Houli reminisce about some of their old friends in common including our sponsor, Sheehy’s Funeral Home. Tony is a fun-spirited guy with more than enough stories to go around! Houli then chats about some upcoming local events including the Knights of Columbus Chicago Police Council 12173’s party on August 14th at Mayfield Banquets where there will be an open bar and all you can eat. Don’t forget the Emerald Society’s Annual Dinner will be on September 11th where they will be honoring Houli with Irishman of the Year 2020/21. Don’t miss it! Houli then brings us up to date on the latest obituaries followed by some great jokes before ending another incredibly entertaining show!