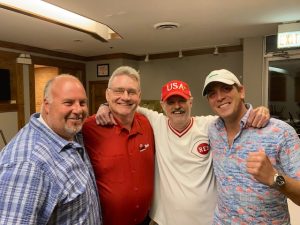 Fox’s Pizza, Guinness, the Cork and Kerry Irish Pub, Flood Brothers Disposal and Chicago Firefighters Union Local 2 present the Hibernian Radio Hour as we continue on our First Responders Tour at The Cork and Kerry Pub on Western Avenue and this week we welcome 30 year Cook County Sheriff’s Office retired veteran and our old pal, Dan Burke, to the show. Dan grew up in Norwood Park and he attended St. Thecla Catholic School. He’s a Gordon Tech graduate and spent some time as a Correctional Officer before joining the force. Dan takes a moment to remember his late father, Dan Senior, who passed away earlier this year. He discusses his father’s legacy as President of the Emerald Society and founder of the Bagpipes & Drums of the Emerald Society. He shares a story from when he was 12 years old and he answered his home phone to find Mayor Jane Byrne on the other end looking for his Dad. That call was the beginning of the founding of Pipes & Drums with a $5,000 donation to get it up and running from Mayor Byrne. Dan Sr. worked as a cop on the west side for 40 years and Dan shares the story about how his father talked him out of working in the city. Houli and Dan then discuss the recent murder of Officer Ella French. “It’s a tough time to be a cop anywhere because you’re guilty until you’re proven innocent”. These two chat about some of their mutual friends from the old neighborhood and Dan discusses what he has been getting up to in his retirement which is mostly him spending time on the lake, getting out of town and attending sporting events .He shares a funny story from his time in Narcotics when he arrested a gang member who became an informant for the officers and Dan dared his partner to quote a movie line during the undercover gun deal. He shares another hilarious story rabout an interview with a teenager who had a quick wit and recognized them as Irish cops. Dan says that he doesn’t miss the job but he does miss the great people and he is grateful his own kids pursued careers other than Law Enforcement. Houli highlights some of the upcoming local events including the 7th Annual Irish American Movie Hooley opening night on Friday, September 24th with “In Search of Weeping Jim” and don’t forget to get your tickets for Houli’s big night on September 11th here. Houli then brings us up to date on the latest obituaries followed by a well-needed trip to our favorite place known as, “Houli-Town”.