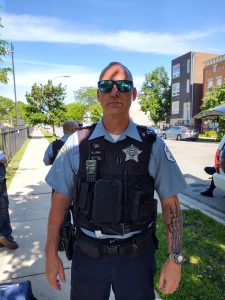 Fox’s Pizza, Guinness, The Cork and Kerry Irish Pub, Flood Brothers Disposal and Chicago Firefighters Union Local 2 present the Hibernian Radio Hour as we continue on our First Responders Tour at The Cork and Kerry Pub on Western Avenue and this week we welcome recently retired CPD officer, Brian Doyle. Brian hails from Norwood Park and is married with two sons. He attended UIC and graduated with a degree in Political Science. He spent 18 years with CPD and eventually became an instructor in the Tactical Training Unit. His father was a Sergeant for 32 years and his older brother retired from CPD a month before him so it’s safe to say his family’s blood runs blue! He remembers how his father was not happy when he became a police officer because he was “too smart”. Brian spent 14 years with the Marine Corps and he tells Houli about his experience on duty where he spent some time in the Mojave Desert and Okinawa just to name a few! He also discusses playing hockey in Tokyo and the lovely friendship he had with his Japanese teacher who helped him get into a graduate program there. He was the only non-Japanese hockey player in the whole division and “Killer of people” was his nickname – no explanation needed! These two guys discuss the differences between life in the States compared to Japan and the challenges Brian had as the tall, white man working at a Japanese bar. He also worked on the SWAT Team in Chicago and he talks about some of their tryout requirements including scaling buildings, learning to shoot on a timer and practicing their quick response. He shares some stories about his time on SWAT and some of their most difficult calls to police officers’ homes. Brian is a proud advocate for mental health awareness and discusses the rising rate of CPD officer suicides, especially among retired officers, “It’s ok to go get help!” He and Houli also chat about how Covid has affected CPD and what the future holds for our beautiful city if we continue on the current path, “I didn’t retire because I was afraid to do my job, I retired because I wasn’t allowed to do my job.” Brian finishes his insightful interview by giving us a glimpse into his retirement which consists mainly of him spending time with his teenage boys. Houli chats about the ‘Irishman of the Year 2020/21’ award that he will receive over the weekend and he brings us up to date on some of the upcoming events including the 7th Annual Irish American Movie Hooley opening night on Friday, September 24th with “In Search of Weeping Jim”. Then it’s over to the latest obituaries followed by a musical break with “Kelly The Boy From Killane” by The Chancey Brothers. We end another jam-packed show with one final trip to our favorite place known as, “Houli-Town”.