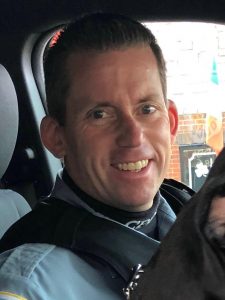 Fox’s Pizza, Guinness, The Cork and Kerry Irish Pub, Flood Brothers Disposal and Chicago Firefighters Union Local 2 present the Hibernian Radio Hour as we continue on our First Responders Tour at The Cork and Kerry Pub on Western Avenue and this week we welcome our old pal, Jim Bailey. Jim is a Mount Greenwood native and attended Marist High School where he played hockey. He was awarded the Marist High School Time & Eternity Award and some of his old classmates were in attendance. He has been on the Force for 27 years and is an active member of both the CPD Hockey team and Triathlon team. Jim chats about how many of his family work or have worked in Law Enforcement, including his sister who works as Sheriff Deputy and his father who is a retired 38 year CPD veteran and whose star Jim now wears with pride. He also chats about his lovely wife and 18 year old son, as well as sharing a great story about his incredible Aunt Flo who lived to be 100 years old! Jim worked as a Field Training Officer for 5 years and tells some interesting stories from his time training new officers out on the field and the harsh reality they face on their first days. “You have to be an example and take care of the guys”. Jim is currently in ‘Sergeant School’ and tells the exciting story about when he “got the call” to tell him he had been accepted. He discusses what it takes to become a Sergeant and what the end exam is like. Jim has his fair share of work stories to tell including the time a guy barricaded himself inside his home and tried to get Jim to buy him drugs and another story about hearing bullets whizz by while being shot at. He and Houli delve into why domestics are some of the most dangerous calls and how recently, mental health calls are becoming more frequent. When asked about his opinion on the current social unrest between the police and the community, Jim replies “The people who support us are significantly more than those who don’t.” Jim’s advice to everyone during these unprecedented times is, “Make yourself laugh at least once a day!”. Houli then brings us up to date on some local upcoming events including the Annual Irish American Movie Hooley opening on Friday September 24th with “In Search Of Weeping Jim” and be sure to get your tickets to join Houli on his trip to Ireland in October – call Deirdre Kiely at 1-800-664-7474. We then hear the latest obituaries and then we’re off to “Houli-Town” with very special guest, Johnny ‘Vegas’ Sheahan, who stops by to catch up with Houli. Johnny tells some childhood stories about our old pal and his brother, Skinny, to end another jam-packed show.