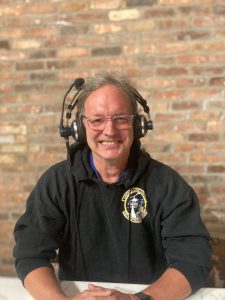 Fox’s Pizza, Guinness, The Cork and Kerry Irish Pub, Flood Brothers Disposal and Chicago Firefighters Union Local 2 present the Hibernian Radio Hour as we continue on our First Responders Tour at The Cork and Kerry Pub on Western Avenue and this week we welcome retired Cook County Sheriff’s Police and Helicopter Cop, Ed Graney. Ed grew up in Oak Lawn and spent over 30 years in Law Enforcement. Ed is a fellow Mount Carmel guy and gives a shout-out to his family, especially to his wife, Grace, as they are celebrating their 26th anniversary! Ed just retired back in June and he talks about meeting Houli at the recent Annual Emerald Society Awards night. After graduating from Chicago State University. he worked Security until he was accepted to the Sheriff’s Police soon after he took the test. He worked for different divisions in the Department of Corrections and discusses the benefits of receiving training from senior officers in the jails. He worked at ‘Boot Camp’ for 5 years where young offenders are given “living experience” and taught important basic skills like shaving, writing letters etc. Ed also worked as a a Tactical Flight Officer, aka: ‘Helicopter Cop’, using the helicopter’s infrared camera to help locate suspects and giving the pilot directions. He learned quickly on the job that infrared cameras are a huge help to ground officers, especially in high speed chases and foot chases. Ed takes us through a typical helicopter call, the correct protocol and what they would do to help ground officers when the perp hid. He shares a story about responding to a fatal stabbing and how he identified the attacker due to his high body heat and they followed him up until the moment of arrest. “It is a great unit to be in, especially if you’re young!”. The helicopter unit was cancelled and Ed discusses it’s reformation in the ’90s as well as sharing another story about coming across someone growing marijuana. He takes us though how they guided a plain clothes Narcotic officer to the stash and the call he got while with his kids to go do a surprise news conference where he was praised for the bust. “I didn’t want the fame but it was a story!”. In 2015, Ed moved to the Special Operations Group and worked as security for the Department of Revenue .He describes two of his favorite car chases in detail with Houli to end another very insightful interview! Houli then chats about some upcoming events and brings us up to date on the latest obituaries. That’s followed by some classic jokes to end another great show this week!