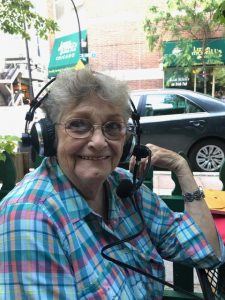 Fox’s Pizza, Guinness, the Cork and Kerry Irish Pub, Flood Brothers Disposal and Chicago Firefighters Union Local 2 present the Hibernian Radio Hour as we continue on our First Responders Tour at The Cork and Kerry Pub on Western Avenue and this week we welcome our old pal, Maureen Loughney and veteran paramedic, Nancy Bonko to the show. Maureen is a retired Chicago Fire Department Paramedic Chief and she was the 9th woman hired by CFD in 1975. Maureen’s philosophy is, “Treat every patient as if they were your Grandma”. Both ladies are Bridgeport natives and chat about when they met growing up. Maureen was a big part of why Nancy joined the Force. These two worked together at Chicago & Michigan and drop some of the bigger names they tended to while stationed there including Irv Kupcinet and Mr. Harris of Harris Bank. They share some stories from their time working together including the times when Maureen took a tour of an extravagant house during a work call and some of the crazier calls they responded to including a guy trying to get a ride by ambulance to an appointment at the hospital! These women are true heroes who rushed to New York to help out during the aftermath of 9/11. However, there’s never a dull moment with these two and they share the hilarious story about Maureen’s New York taxi mishap that left the car’s door off its hinges! They also talk about attending school to become an EMT/Paramedic and what it was like working in “a man’s domain” – Maureen explains how sleeping quarters were separated by gender when she first joined CFD. These two gems share what they’ve been getting up to in their retirements – Nancy got a part-time job at Ace Hardware and Maureen has been cooking and attending retirement parties! The ladies end their interview by sharing some of their favorite war stories including Maureen training firefighters to treat everyone with kindness, “as if they are your Grandma” and Nancy responding to a call about a lady with a meat cleaver stuck in her head! These ladies certainly know how to roll with the punches and we are honored to have them join us! Houli then brings us up to date on some of the local upcoming events and that’s followed by the latest obituaries. We take one last trip to “Houli-Town” to end another great show with two great guests!