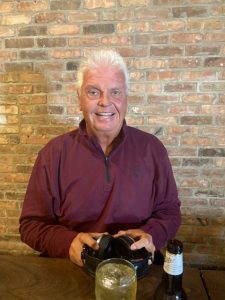 Fox’s Pizza, Guinness, The Cork and Kerry Irish Pub, Flood Brothers Disposal and Chicago Firefighters Union Local 2 present the Hibernian Radio Hour as we continue on our First Responders Tour at The Cork and Kerry Pub on Western Avenue and this week we welcome 33 year CFD veteran, Patrick “Scoops” Haynes. He was born in Visitation Parish and moved to Bridgeport when he was 11 where he attended Healy Grammar School followed by DeLasalle Meteor, Class of ’74. He joined the Chicago Fire Department  in ’86 and was assigned to Truck 7 on the Westside where he worked for 15 years. He delves into the untimely death of his mother at the early age of 44, as well as his troubled relationship with his father. “When he left, it was a blessing for my mother.” He also chats about his daughter who worked as a Cardiac Intensive Care Nurse for 22 years and his son who is a Building Engineer with Local 399. Scoops explains what a “Food Club” is and how he still managed to eat well before his own unit incorporated the club idea. Scoops has a long 30 year history with the Hamburg Club in Bridgeport, the oldest charter club in Illinois at 120 years old. They do a lot for the community such as sponsoring baseball teams. Scoops began working for Streets & Sanitation as a Sanitary Engineer before moving over to the CFD. “It’s a dangerous gig but not a bad gig!”. Scoops says he misses the job “like life’s breath” and all the fun camaraderie. He explains how he got the nickname ‘Scoops’ because everyone liked to give him the latest gossip or the “scoop”. He retired in 2000 after he suffered a heart attack at a fire, ending up with 3 stents and a pacemaker. He and Houli discuss some of the best old bars on the Southside and some of the shenanigans that went on. Scoops shares some of his most memorable stories from his extensive career including a story about a German paramedic using a stun gun on a karate expert. He calls Illinois a double-edged sword because “you’ve got the weather and the politicians”. The residual health effects from working as a firefighter, his original plan to join the Police Academy and the current social unrest are just some of the hot topics these two discuss during this insightful interview. When asked what he would say to anyone looking to join CFD, he replies “It’s the greatest job you’ll ever have!”. Houli chats about his upcoming trip to Ireland and that’s followed by the latest obituaries. We take a musical break with  Liam Durkin’s cover of “Spancil Hill” and then it’s off to a final trip to “Houli-Town”.