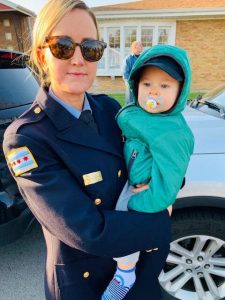 Fox’s Pizza, Guinness, the Cork and Kerry Irish Pub, Flood Brothers Disposal and Chicago Firefighters Union Local 2 present the Hibernian Radio Hour and this week we take another trip back to two of our favorite past interviews. The first interview we revisit is with Detective Kathleen Dorich. Kathleen grew up in St. Barnabas and has a Masters in Criminal Justice. Her brother convinced her to take the CPD test so she could pay for college and it certainly paid off! She discusses her family with Houli including her son, Steven, and her husband who works in the Fire Dept. Kathleen looks back over her first assignments on the Force including working at the beaches up North. She also worked on the Tac Team and ‘Angel Duty’ aka: Decoy Prostitution. The stories she has from her undercover work are priceless including being offered a sandwich instead of money and the time she scared a cardinal! She is a total boss who has worked in some of the toughest neighborhoods around Chicago. She currently works as a Property Crimes Detective in the 4th District and the recent looting has kept her department very busy! She and Houli discuss the current crazy times we live in and when he asks her about her views on today’s craziness, she says: “The Police are just enforcing the law…”. We then go to a musical break with “Red And Green Of Mayo” by The Saw Doctors. The second interview we revisit this week is from our special St. Patrick’s Day show in 2020 with the Mayor of County Cork, Ian Doyle. Skinny is guest host and he and Houli chat to Ian about his plans for his stay in Chicago even with the parade cancellations. Then we take a trip over to our favorite place called “Houli-Town” followed by some music by The Wolfe Tones and Eimear Arkins. Happy Halloween folks!