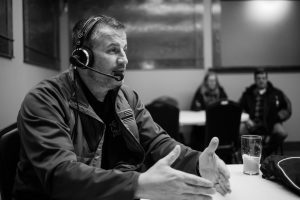 Fox’s Pizza, Guinness, The Cork and Kerry Irish Pub, Flood Brothers Disposal and Chicago Firefighters Union Local 2 present the Hibernian Radio Hour and Houli is back so we continue on our First Responders Tour at The Cork and Kerry Pub on Western Avenue and this week we welcome honorary Irishman and President of the Fraternal Order of Police Lodge 7, John Catanzara. John attended St. Rita High School and worked with CPD for 25 years. He wastes no time in jumping into the serious talk with Houli and begins by explaining the latest edict put out by Mayor Lightfoot regarding covid-19 and how it was received by the FOP. He also chats about the FOP attorneys and how helpful they are during these tumultuous times, particularly Paul Vallas. “All I’m doing is voicing the concerns and frustrations of the officers.” It’s safe to say that John is a controversial character but that’s why we love him! He still faces numerous challenges as President and he goes into detail about some of those obstacles, especially dealing with the Mayor’s office. There’s talk of John running in the next Mayoral election! He and Houli discuss the current societal divide and the obvious changes that are occurring in this country. He explains how some Aldermen are scared to speak up against the Mayor’s office in case it affects their position. Houli asks John about the negative press and the media’s lack of follow-up on facts in interviews. John always tells it like it is and he discusses some of the hopes he has for the officers down the line. “I’m their biggest cheerleader and I will continue to be!”. John gives some insight on what Lori Lightfoot is like behind closed doors after a private meeting with her last year. Covid requirements in CPD, the controversy surrounding the vaccine and the importance of unions are just some of the other topics of conversation between these two friends. There is a lively crowd at the show this week in support of John and the craic is mighty between these two even amongst all the serious discussion. Houli then brings us up to date on some of the upcoming events as well as the recent obituaries. We take a trip to “Houli-Town” to end a very insightful and interesting show!