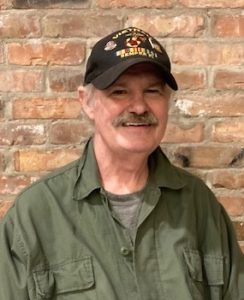 Fox’s Pizza, Guinness, the Cork and Kerry Irish Pub, Flood Brothers Disposal and Chicago Firefighters Union Local 2 present the Hibernian Radio Hour as we continue on our First Responders Tour at The Cork and Kerry Pub on Western Avenue and this week we welcome back for the sixth time our old pal and local legend, James “Duke” Lynch, AKA: Alamo! Alamo is a South Shore native who attended St. Philip Neri School and Lyons Township High School. He is a Bronze Star recipient, having lost both knees in the war and still returning to combat after a 3 month recovery. Alamo is a U.S Marine Corps Vietnam Veteran and a retired 39 year veteran of the Chicago Police Department. He also spent 15 years as a bodyguard to Mayor Daley/ It’s no secret that he is a devoted fan of the ‘Duke’ John Wayne. He had to repeat the 5th grade because he skipped school for a full month to go see his all-time favorite movie “The Alamo” at the theater and he even took time off work to attend Wayne’s funeral! As the Marine Corps celebrates it’s 246th birthday this week, Alamo shares numerous stories from his time with the Marines including the story of him falling 30 feet from a helicopter and laying in the Paddy fields thinking he wouldn’t survive but as he says himself, “The marines never leave a man behind!”. He tells Houli about being saved by a fellow marine in the Paddy fields from a mine and the scuffle he got into at O’Hare when he returned in uniform that led to a broken finger – you should see the other guy! He had quite a few ‘close calls’ in Vietnam and tells Houli about his mother having a stroke when she was falsely told that he had been killed in combat. Alamo shed light on the alarming suicide rate in veterans and CPD as well as the lack of counselling for veterans with PTSD. “There’s a disrespect for the law now..” Rising gas prices, current politics with focus on Biden and the media’s negative influence are just some of the other interesting topics of conversation these two cover on this week’s show. Alamo gives some shout-outs to his fellow veterans to end another wonderful interview. This guy is a real character and we’re delighted to have him return to the show for the sixth time! Houli then brings us up to date on the recent obituaries followed by some stories from his recent trip to Ireland. Then it’s off to “Houli-Town” to end another great show this week. Happy Veterans Day to all our heroes!