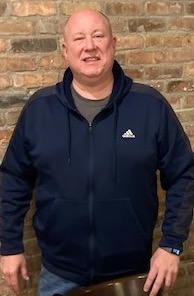 Fox’s Pizza, Guinness, the Cork and Kerry Irish Pub, Flood Brothers Disposal and Chicago Firefighters Union Local 2 present the Hibernian Radio Hour as we continue on our First Responders Tour at The Cork and Kerry Pub on Western Avenue and this week we welcome back our old pal, Lieutenant Danny Shine. Danny has been working with CPD for 26 years and is a Navy veteran as well as a proud Southsider.  He was recently sworn in as Lieutenant last August and was assigned to the 6th district where he says “I’m being kept busy!”. Danny tells people that he was “made in Canaryville” but grew up in St. Gerald’s parish and he later graduated from DeLaSalle. Some have even called Danny “The Mayor of Mt. Greenwood!”. He shows off some of the language skills he picked up on his travels with the Navy and describes what it was like seeing Pope John Paul in person at the Vatican. He joined the Force in 1995 and has worked in many different districts including Englewood. Danny first took the Chicago Housing Authority test and worked there for a year before joining CPD and working in the city. It’s safe to say this guy is a true Irishman and these two pals share some of their best memories of Ireland and the shenanigans they always seem to get themselves into up to while there! Danny talks about the History of Chicago class he attends at DeLaSalle and he explains how his own adoption ended up being linked to his school research. He also talks to Houli about what pushed him to join the Force and what it was like working with missiles as a Gunner’s Mate in the Navy. We’re always delighted to have this legend and proud Irishman on the show! Houli brings us up to date on some upcoming local events including the 4th Annual Hooligan Ball on Saturday, December 18th at The Cork & Kerry. Then it’s over to the latest obituaries followed by a quick joke. We end another wonderful show with the lovely “Noble Call” by Paddy Homan.