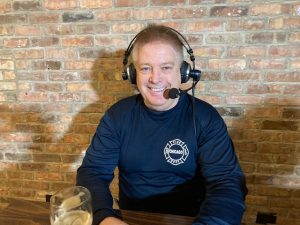 Fox’s Pizza, Guinness, the Cork and Kerry Irish Pub, Flood Brothers Disposal and Chicago Firefighters Union Local 2 present the Hibernian Radio Hour as we continue on our First Responders Tour at The Cork and Kerry Pub on Western Avenue and this week we welcome retired CFD Lieutenant Patrick McCauley to the show. He grew up in Oak Lawn and begins by chatting about his siblings and father who also worked as a firefighter. Pat joined the Fire Department in ’88 and spent 32 years with them. Before that in ’81, he joined the military because he had “no sense of direction”. He discusses his experience at boot camp with Houli and how difficult it was at the beginning. Pat worked in the Marines, the Army National Guard and the Air Guard where his job was to refuel planes in mid-air. He explains in detail how that intricate operation took place and some of the sticky situations they got themselves into. It’s seriously interesting but dangerous stuff! Iraq, Afghanistan and Bosnia are just some of the countries Pat visited and he mentions that some of his most difficult missions were picking up the wounded in Afghanistan, especially the injured children. He shares some nail-biting stories from his time in action and states that he’s a bit of an adrenaline junkie. Pat admits he does miss the action but he’s certainly keeping busy in his retirement with the McCarthy Brigade which teaches classes of 70-100 young adults about combat directly from the SWAT team, Dive Team and other branches. He explains what the Flag Project is and where he was on 9/11. Patrick has spent a lot of time making sure the victims of that national tragedy are remembered, especially the heroic First Responders who lost their lives saving others. He attends many flag presentations to victim’s families as well as flag-raising ceremonies and stresses the importance of honoring our fallen with these ceremonies, the most recent one being in honor of Officer Ella French. “Some CPD officers should have combat ribbons!”. Pat chats about his hopes for the Brigade’s future which includes expanding to other states. Houli brings us up to date on some upcoming local events including the 4th Annual Hooligan Ball on Saturday, December 18th at The Cork & Kerry and then it’s over to the latest obituaries followed by a final trip to our favorite place known as “Houli-Town”! Don’t forget, if you are interested in donating toys to “Christmas for a Cause”, please contact Chubs Polfus at 708-692-3524.