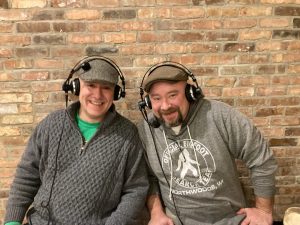 Fox’s Pizza, Guinness, the Cork and Kerry Irish Pub and Flood Brothers Disposal present the Hibernian Radio Hour as we continue on our First Responders Tour at The Cork and Kerry Pub on Western Avenue and this week we welcome brothers, Joe & Mike Larkin, to the show. These guys grew up in St. Denis Parish and both attended St. Rita’s. Go Mustangs! There are 5 boys and 1 girl in their family and all the boys attended St. Rita just like their father. The guys chat about family with focus on their grandfather who hailed from Castlegregory in County Kerry and how he influenced their musical tastes. “We didn’t appreciate it until we got older!”. Joe has been an investigator with the Strategic Intelligence Unit of the Cook County Department of Corrections for 15 years. He attended Cornell College and worked multiple odd jobs before joining the Force. Mike attended Loras College and has been with the Chicago Fire Department for 25 years where he works as Captain. The two brothers are also an intricate part of ‘The Larkin & Moran Brothers Band’ which consists of the two Moran brothers and their cousin as well as Mike, Joe and their brother Dan Larkin who is here supporting them at the show this week! This incredibly successful band is in its 25th year! Joe and Mike discuss when they first started the band, how they randomly landed their first gig with no experience and they also take some time to remember their late friend and band member, Mike “Murph” Murphy, who supported them from the very beginning.  Mike and Joe discuss what it was like playing in Ireland and share some of their best memories from that trip including getting the chance to play in The Quays in Galway. Gigging since the pandemic has changed drastically but the guys are getting back into it now with some gigs coming up including the 4th Annual Hooligan Ball on December 18th at the Cork & Kerry and at the FOP Lodge on March 12th for the Emerald Society’s St. Patrick’s Day celebrations. When asked what they love the most about gigging, they both reply “The free beer!”. The lads share some more band stories including how they booked a gig in Vegas while using the men’s bathroom… Fist fights and disagreements are a normal part of being in a band and they chat about some of the times they got into it including a huge group fight that broke out while they were packing away their gear. Their musical influences, the importance of failing first and their worst gigs are just some of the other topics Joe and Mike cover with Houli. There’s such great banter between these brothers as well as the usual sibling rivalry which makes for a very entertaining interview! Houli then brings us up to date on the most recent obituaries followed by a quick trip to “Houli-Town” to end another wonderful show.