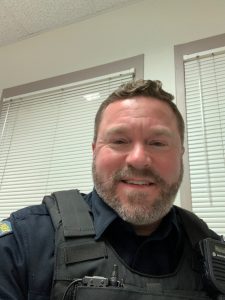 Fox’s Pizza, Guinness, the Cork and Kerry Irish Pub and Flood Brothers Disposal present the Hibernian Radio Hour as we continue on our First Responders Tour at The Cork and Kerry Pub on Western Avenue and this week we welcome 24 year Law Enforcement veteran, Sergeant Keith Sullivan. Keith grew up in St Nicholas of Tolentine parish and attended St. Laurence. His father was a Local 399 Engineer and also a member of the Shannon Rovers Pipe Band. He chats about his wife Natalie and his 2 daughters who are both interested in the same kind of First Responder work as their father. Keith attended Trade School and was certified as an Aircraft Mechanic. He discusses his fascination with aviation from an early age and how he joined the Civil Air Patrol to pursue that love. He looks back over his time working on the BNSF railway and explains how he was recruited by a headhunter in ’95 while working at the airport. Both the Air and Rail manuals were very similar so he felt it was an easy transition and the experienced workers aka: ‘The Railroad Cats’, helped train and guide newbies like Keith. He always had positive CPD interactions growing up as well as when responding to rail accidents and he states that’s what helped push him to take the test and join the Academy. He worked in Mokena and Frankfort for 5 years before moving over to Tinley Park. “I wanted to get out there and help people!” Keith has been Sergeant for almost 11 years and takes us through a typical day on the job as well as delving into some of the main issues they run into as suburban police. “We do feel the negativity out here but our residents come out and support us!” Since the mental health facility was closed in Tinley, they have been working with the Crisis Intervention Team to help those individuals in need. Keith leads 8 men on his team as Sergeant and he tells Houli, “They make my job a lot easier!”. He was assigned to a SWAT team for 14 years executing hostage rescues, detaining barricaded gunmen etc. He also explains how his skills and experience as an air mechanic transferred over to his work in Law Enforcement. Keith mentions some of his best work pranks including hiding a can of tuna under the driver’s seat and talcum powder in the vents! He shares his retirement plans and his hopes for the future of Law Enforcement. This guy is a wealth of knowledge and it’s our pleasure to have him on the show to share his incredible stories! Houli then brings us up to date on the recent obituaries followed by a very interesting story from an old friend of Houli’s, Tom Nardini, who shared his story about experiencing loaded guns on a movie set. We end another wonderful show this week with a great joke!