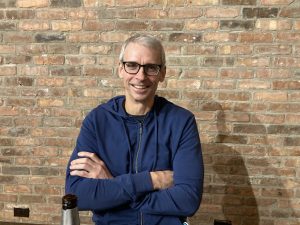 Fox’s Pizza, Guinness, the Cork and Kerry Irish Pub and Flood Brothers Disposal present the Hibernian Radio Hour as we continue on our First Responders Tour at The Cork and Kerry Pub on Western Avenue and this week we welcome celebrated Playwright and filmmaker, James Lynch to the show. James grew up in Jefferson Park and attended St. Pat’s High School. Go Shamrocks! He attended Loyola on a Water Polo scholarship and later attended Law School. Jim chats about his family with focus on his three children and the story of where he met his wife. He has 4 siblings and both his parents hail from Mayo and Tipperary but met in Chicago when they moved here in the early ’60s. His father took part in some amateur plays with the Council of Irish Arts and Jim talks about attending those auditions with his father. Jim started out as a playwright and he and Houli discuss his successful filmography that is heavily influenced by his Irish heritage. “The Tallest Man” which is set in Ireland ran for 4 months in Wrigley and was Jim’s first big play! Some of his other successful works included, “The Cheek ” and “CCX”. Jim’s latest film “Ghostwriter” premiered in Hollywood in August 2021. Jim can’t give the incredible actors and crew enough credit for their work on the movie.  “It’s a writer’s film!” Jim chats about some of the incredible actors he has worked with over the years and he mentions that some of his written characters are based on people in his own personal life. He is currently working on a feature called “The Black Dress” which is set in the early 80s Cook County Criminal Courts.  Jim then delves into his recent throat cancer diagnosis and how his latest clean bill of health has given him a new love for life. “The only way to get back, is to go back”. Budgeting, filming in black and white and the difficulty of showbusiness in Hollywood and Broadway are just some of the other topics covered by the guys this week! Jim  has worked as Assistant States’ Attorney for 25 years and  he is also Supervisor of Asset Forfeiture at Daley Center. Jim gives us some insight into how marijuana is becoming the main drug he sees in Cook County. This guy has a plethora of knowledge and we are honored to have such a talented playwright join us this week. Houli then brings us up to date on the latest obituaries followed by a great joke and “Christmas In Killarney” to end another wonderful show. Merry Christmas to all our listeners!