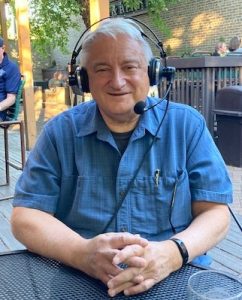 Fox’s Pizza, Guinness, the Cork and Kerry Irish Pub and Flood Brothers Disposal present the Hibernian Radio Hour as we continue on our First Responders Tour at The Cork and Kerry Pub on Western Avenue and this week we take a look back at one of our favorite interviews from 2020 with 40 year Law Enforcement veteran Eugene Roy. Eugene grew up in St. Joachim’s parish and is a St. Philip’s alum. He looks back on his childhood growing up in a rough neighborhood where he could see a brothel from his school window. As Eugene says himself, “It’s a different form of sex education!” He joined the Force in 1986 and chats about the officers he met after church on Sundays who influenced him to become involved with Law Enforcement. His own son followed in his footsteps and now works as a Lieutenant in Wisconsin! Eugene began his career in Law at just 20 years old as a telecommunicator/dispatcher and then moved to the Office of Professional Standards where he investigated police shootings and allegations of excessive force. Eugene worked in Narcotics Investigations for the State Attorney General’s Office while living in North Dakota. He chats about how he worked his way up to become CPD Chief of Detectives and he shares some of the best stories from his extensive career including the craziness surrounding he White Sox World Series win when the FBI landed a helicopter on the train tracks. Eugene has also worked on some high profile cases including the pregnant woman who was shot and killed during trick-or-treating in ’07 and a family of six who were murdered, two of those were children in ’16. After seeing the toll the stress of the job was taking on his officers, he decided to get involved in officer wellness during his retirement by helping officers take care of their mental health – “We want to prevent officers from getting to the point where they have PTSD”. Please donate and help support the heroes that keep us safe everyday at their website. Gene is a perfect example of a purpose driven retiree who works at giving back to the CPD community in this season of stress for our police. Bank the Blue! Houli brings us through some of the upcoming local events including the Emerald Society’s Annual Chili Cookoff on January 10th as well as the taping of “Our Irish Pub” on January 11th at Mystic Rogue Irish Pub. Hope to see you there! Then it’s over to the obituaries to end out our first show of the year. Happy New Year to all our loyal listeners!